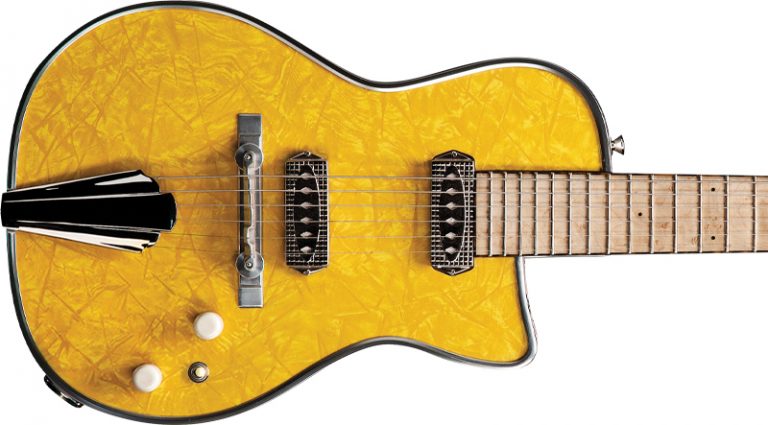 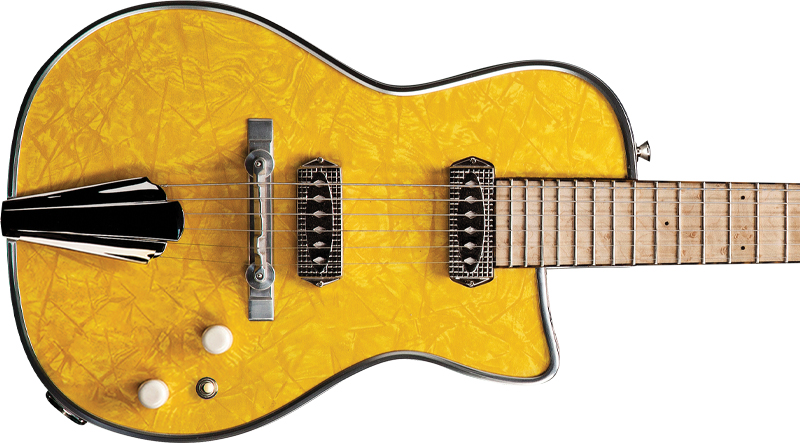 For a decade, Daddy Mojo has been making cigar-box guitars that refine the vibe of those rudimentary instruments. In 2016, the company debuted a line of traditional guitars under the banner of DM Electric Guitar Company.

One of its first was the Ozark – a modern take on ’50s budget electrics. Builder Lenny Piroth Robert was inspired after moving into an older home; during renovation, contractors removed 86-year-old pine that Robert salvaged for his own use. He also grabbed the ’60s yellow Formica counters and wall paneling.

These reclaimed materials are put to use in the Ozark, a 23.5″-scale solidbody that resembles an early Harmony Stratotone. Spying a guitar with a Formica top is hardly an everyday occurrence, but it is extremely cool. The back of the neck and body are finished in a beautiful tobacco sunburst, and one of the most interesting features is the aluminum molding encircling the body just like on many a kitchen table in the ’50s.

Other appointments include a chunky but extremely playable maple neck with 23 frets made of wood rescued from the bottom of a Quebec riverbed. It’s topped with a lovely birdseye-maple fretboard, and that Formica also serves as a fetching headstock overlay, while the neck binding and truss-rod cover are both an attractive imitation tortoiseshell. The tuners are vintage-style, with open backs.

The controls are of the basic ’50s and ’60s econo-box ilk – one Tone and one Volume alongside a three-way selector switch. The pickups are proprietary Daddy Mojo single-coils that sonically resemble old DeArmond gold-foils. Plugged into a Sommatone Slick 18 amp, they responded with plenty of clean sparkle and high-end cut. Even the neck pickup served up usable jangly tone. The middle position performed nicely for rhythm chores, and the bridge pickup gave Tele-style sounds. When plugged into a small Vox with the overdrive engaged and finally dimed, the Ozark turned into a snarling dog with plenty of sustain to spare. Most guitarists would be hard-pressed to ask for more. This is simply a fun instrument to play, certainly one to consider, particularly for those into blues and Americana playing.

The Daddy Mojo Ozark breaks the mold of Strat and Tele clones, and is sure to draw the attention of anyone with a taste for funky retro chic and unusual styling.