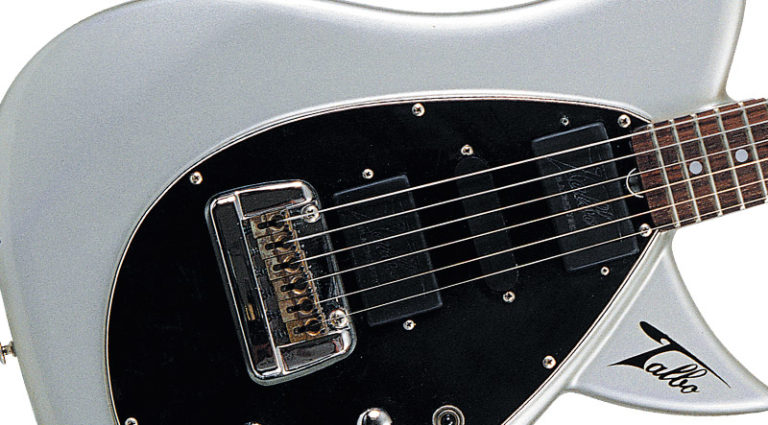 For aficionados of copy guitars – replicas of mostly American classics that give U.S. manufacturers apoplectic fits – perhaps no company is more respected than Tokai, whose 1970s and early-’80s Love Rock and Breezy Sound models are among the most desirable of that breed and command relatively big bucks in the collector market. But in an irony that periodically surfaces in guitar history, while Tokai doesn’t eschew its copy days, the company’s flagship guitar line is its high-tech Talbo guitars, with modern alternative materials wrapped in an almost timeless modern package.

According to company sources, Tokai entered musical instrument manufacturing in 1947, when it began making Harmonicas for domestic consumption… or would that be exhalation? Both. Anyway, in May, 1965, Tokai began producing acoustic guitars. Shortly thereafter, Tokai began to make solidbody electric guitars. Perhaps Tokai’s most interesting ’60s solidbody was the legendary Hummingbird from ’67 – a sleek, streamlined take on Semi Moseley’s flipped-over designs, complete with a German carve (a modern Korean-made reissue is now available). As far as is known, these early Tokai guitars probably stayed in Japan and were not exported.

Tokai’s acoustic guitars were of sufficient quality by 1970 that American manufacturers were looking at them to provide a less-expensive alternative to compete with growing competition from companies that were having success with budget-priced Japanese guitars carrying brands such as Ibanez, Electra, Univox, and Aria. In ’72, Tokai contracted to supply C.F. Martin with its Sigma acoustic line, and the parts that were assembled in the U.S. as Martin’s Shenandoah guitars. In ’73, Tokai also began to provide Martin with its first imported solidbody electric guitars, also carrying the Sigma brand. These early Tokai-made Sigmas included two Gibson SG copies, a Fender Tele copy, and a Fender bass copy. As with most Martin attempts to market electrics, this effort was short-lived, and these Tokai Sigmas were history by 1975.

Almost exactly at the moment that the “copy era” was coming to a close in the U.S., Tokai began making its solidbody electric copies of American classics, including a Les Paul copy called the Les Paul Reborn, probably in ’76, and the aforementioned Love Rock and Breezy Sound in late ’77. By the early ’80s, Tokai had progressed to producing superb replicas of a range of historic American guitars, true to both the originals’ physical specifications (neck profile, colors) and sound.

Armed, no doubt, with the sophisticated expertise it acquired in developing these accurate copies, Tokai turned to creating a guitar unique unto itself. The result was the Tokai Talbo Blazing Fire, which commenced production January, 1982. Talbo is actually an acronym for Tokai Aluminum Body.

Made of cast aluminum alloy AC-4B, which is commonly used in racing car engines, the Talbo’s design is simple and elegant, combining new and traditional elements. Basically, it’s like two superimposed teardrops with the tips pointing right and left to yield a bi-level, sculptured double cutaway. Its headstock decal reads “The New Legend Of The Guitar History.”

The idea behind the Talbo was to create a cool design that would also serve as shielding for the electronics. Most of the body is solid, but there’s a large cavity under the pickguard that serves as a sound chamber, and lessens the weight. The neck is straightforward maple attached with four bolts at a scalloped contoured easy-access neck joint. This Blazing Fire features a pickup combination that anticipates the layout later favored by Yamaha. Controls are two volumes and one tone. Two-humbucker models have been seen, and there may have been more layout options. Certainly this was the case with later versions.

The Talbo Blazing Fire is a swell guitar, comfortable, easy to play, with a great sound. If there’s a limitation, it’s that the three-way select limits the tonal potential, although this is mitigated somewhat with the two volumes. Perhaps the most famous appearance of the Tokai Talbo in the 1980s was in the hands of the band Devo.

Tokai Talbos were promoted briefly in American and European markets for perhaps a couple years, but after 1984 seemed to disappear from the radar. They didn’t actually go away, though. The Talbo appears to have continued in production in Japan since its ’82 debut. And what’s more, it continued to evolve. What had been called the Blazing Fire became simply the Talbo, in its present state offered with twin humbuckers. Then in ’99, Tokai introduced the Talbo Woody, an all-wood version made of two hollowed-out pieces of maple. A more interesting variant was the Talbo Junior that debuted in 2000. It takes the teardrop-shaped sound chamber and encapsulates it in cast aluminum, then hollows the top of the body and cutaway horns, making them just a frame. Then, to spice things up, it adds a built-in amplifier under the strings. That same year, the Talbo’s body was extended and turned into the Talbo Bass. And finally, Tokai brought back the Blazing Fire moniker on a fantastic blue-tinted transparent plexiglass version, still with the 3-D Talbo shape, but with narry a hint of aluminum. These are produced in Korea.

If you’re lucky enough to have a Tokai Talbo, you should have no trouble dating it. Tokai used a simple coded serial number scheme. In the 1980s it consisted of Y0P####, with the first digit indicating the year followed by a zero, followed by where it fell in the production run (1 = early, 4 = late, etc. ). This specific guitar’s 3042110 indicates a late production run guitar from 1983. In ’89, Tokai switched to indicating the year with two digits: 89#####.

With the advent of these new Talbo models, tentative global promotion resumed, so you should be able to cop one of the more recent variants. The older Japanese Talbos are pretty rare (they seem to turn up more in the U.K.), and if you find one, expect to pay a pretty penny for it. While the Tokai copy guitars are definitely cool beans, in the eyes of most collectors, it’s the totally unique Tokai Talbo Blazing Fire that takes the prize.

This article originally appeared in VG‘s March ’06 issue. All copyrights are by the author and Vintage Guitar magazine. Unauthorized replication or use is strictly prohibited.