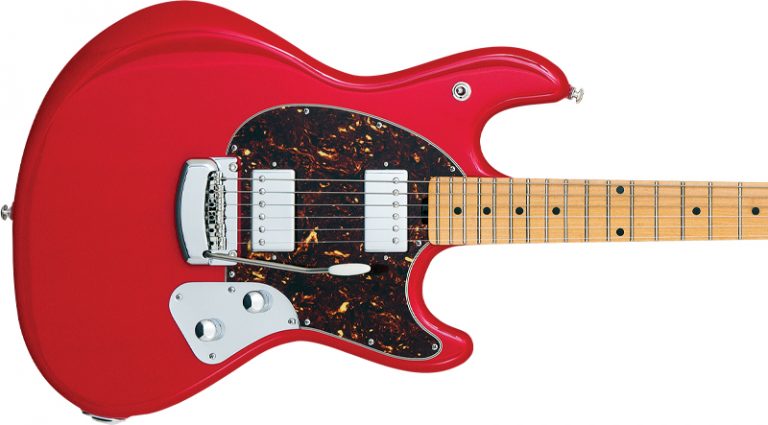 For many builders of solidbody guitars, the challenge is to improve on a handful of pioneering designs from the 1950s and ’60s. No one knows this better than Ernie Ball Music Man – in fact, the brand was co-founded by Leo Fender in 1974. Its latest Cutlass and StingRay solidbodies are attempts to improve classic archetypes in very different ways.

The Cutlass aims to perfect Leo’s 1954 Stratocaster without being a straight-up copy. The tester was an HSS rosewood-fingerboard version (though it’s also available in a more-traditional configuration with three single-coil pickups and a maple fingerboard). The HSS Cutlass is for guitarists who want more girth and firepower for solos and power chords. To eliminate noise, the ’60s-voiced single-coils in the neck and middle positions utilize their active Silent Circuit and buffered output and require a 9-volt battery in a rear chamber. Also look for a five-way pickup selector with 250k Volume and Tone controls.

Other specs include an alder body, maple neck (25.5″ scale, 10″ radius), 22 stainless-steel frets, and Music Man’s trademark 2+4 headstock (for a straight string-pull) with Schaller M6 locking tuners. The bridge is a Music Man Modern tremolo with bent-steel saddles; it’s a dive-only vibrato, but, because it has locking tuners, you probably won’t be able to make the Cutlass go out of tune no matter how hard you try.

The neck profile goes from a soft V (lower frets) to a C carve (upper frets) and the net result is fast and comfortable. Plugged into a tube combo and software-modeling SIMs, the Cutlass evoked old-school tones married to modern performance standards. There was plenty of single-coil quack, but the ’bucker in the bridge delivered additional lead cut and sustain. In fact, a humbucker fitted into an alder double-cutaway is a unique tone in its own right.

The StingRay’s most dramatic departure from the Cutlass is its African mahogany body instead of alder. Combined with passive humbuckers and 25.5″ scale, this plank seeks the elusive sweet spot between Gibson and Fender sensibilities.

Though the StingRay has the same 2+4 headstock and diving tremolo bridge as the Cutlass, its body is an offset shape and its pickguard configuration is different – where the Cutlass has a single sheet of tortoiseshell, this solidbody has tortoiseshell over the pickup cavity and a chrome section under the metal Volume and Tone knobs. Also, the three-way pickup toggle is located in the upper bout – another nod to Lester rather than Leo.

On the job, the StingRay will give you many of the fat humbucker tones players want, from rock and blues to jazz and country. And that neck is super-fast. The mahogany yields hairier tones than the Cutlass, but as mahogany is a denser material, expect the StingRay to weigh a few ounces more.

Both the Cutlass and StingRay give players modified Leo concepts. Cobble them together with the company’s obsessive attention to detail and playability, and you have a pair of superb, professional solidbodies. Right out of the box, each is impressive – though from Ernie Ball Music Man, we expect no less.