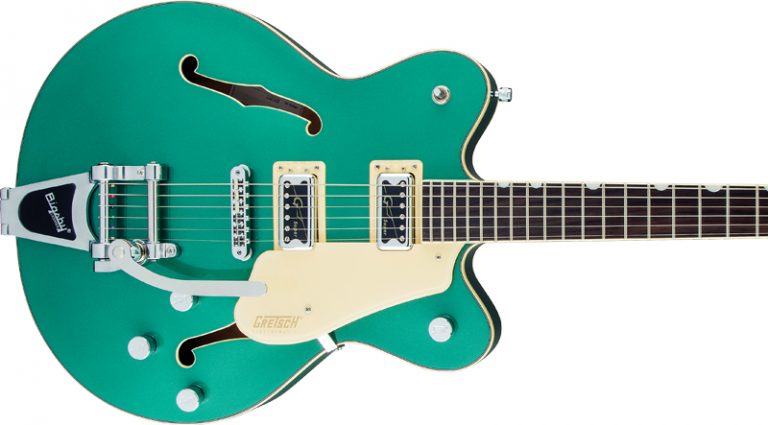 Enamored with the Cadillac of guitars, can’t quite spring for a Coupe de Ville, and don’t want to get stuck with an econobox? Take one of Gretsch’s new center-block Electromatics for a test drive. Simply put, it’s an incredible amount of guitar for the money.

The G5622T picks up where Gretsch’s double-cut models of the mid-1960s left off – and at a price that’ll make you think you’re still living the ’60s dream. The guitar has all the classy styling and high-end appointments – including a Bigsby. Plus, it’s got that sound.

The 1.75″-thick body is made of laminated maple with arched front and back. The secret lies inside: a chambered spruce center block, which Gretsch says emphasizes the guitar’s dynamic resonance, high-gain power, and lightweight comfort. We’ll see…

The standard U-shaped neck is also maple, capped by a rosewood fretboard with a 24.6″ scale. There are 22 medium jumbo frets highlighted by pearloid neoclassic thumbnails. Fingerboard radius is 12.6″, finishing at a 1.6875″ nut.

The oomph comes thanks to a dynamic duo of Gretsch’s Super HiLo’Tron pickups, and here some explanation is needed.

The original HiLo’Tron was first offered in mid-1960 as a budget single-coil variant of the humbucker Filter’Tron. Some folks liked them, others… not so much. George Harrison, though, was among the former.

The Super HiLo’Tron debuted in 2013 as a dual-coil humbucker and it sounds much more akin to a Filter’Tron, voiced with plenty of clean, high-end sparkle while still providing a robust bottom end. In other words, the Gretsch sound.

The Bigsby tailpiece leads up to an anchored Adjustomatic bridge. A highlight is the cream plexi pickguard with golden Gretsch logo. Tuners are vintage-style open-backs. All in all, there’s plenty of bling.

Plugging into a tweed Deluxe, the G5622T is ready to rumble. The guitar’s tone is about everything you could dream of from a Gretsch, especially at this price. It sparkles, it shimmers – and it can shake the windows in their panes. These Super HiLo’Trons get loud.

Dial up the guitar to be warm and rich or cutting and trebly with gobs of gain. The pickups are not especially fat-sounding, but then that’s not what a Gretsch is renowned for. Besides, there are pedals for that.

So what does that center block add? Comparing the G5622T to a double-cut hollowbody G5422T, the center block supplies a richness of tone and depth of resonance, akin to a ES-335. And it makes for a lightweight guitar with more of a solidbody’s sound.

One thing newbies to Gretsch may not realize they’re appreciating is that anchored bridge – as any user of a vintage Gretsch will be quick to point out. The old free-floating bridges held in place by string tension were not up to the power of a good Bigsby or hard-rocking doublestops.

One recommendation would be to swap out the stock .010-.046 strings for something with more heft – perhaps even flatwounds for country or rockabilly. While the lightweights make the guitar optimally playable, heavier-gauges would boost that lovely built-in tone.

Last but hardly least are the color options. The G5622T is available in Black, Vintage Orange (think 6120), and Walnut Stain (Country Gentleman, anyone?). Plus, Gretsch offers its stunning Georgia Green, a lustrous hue straight from a classic ’60s land yacht. Basically, you can’t miss.