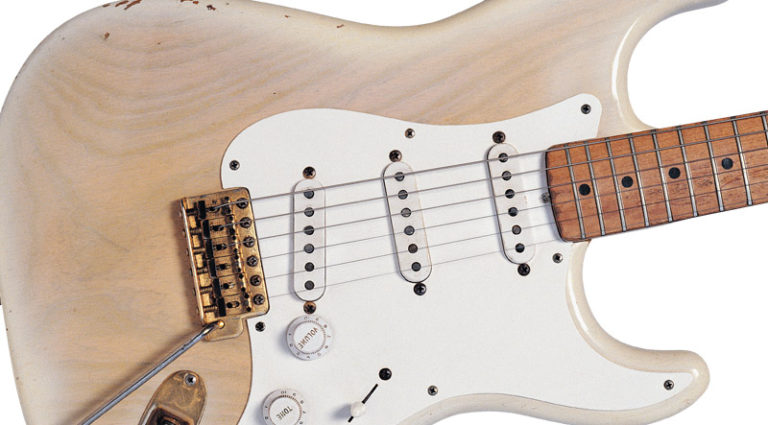 The Fender “Mary Kaye” Stratocaster. A term guitar aficionados have come to associate with a ’50s Strat with blond finish with gold-plated hardware…

Although Mary Kaye never owned one and Fender never offically listed a “Mary Kaye” model, her name has become synonymous with this Strat. Though there are rarer custom-color or one-off prototypes, the “Mary Kaye,” with its translucent, creamy white finish over grainy ash body accentuated by gold-plated hardware is one of the most soughtafter.

First officially advertised in early 1957, the blond/gold Strat was simply a custom version. But the example you see here is different, indeed; not only was it the first one Fender made in this combination, it was actually used by Mary Kaye, and its lineage can be traced from day one.

The guitar, serial number 09391, was assembled in January ’56, a year before the blond/gold combination was available to the public. Fender president Don Randall mostly kept the guitar in his office for six months and in that time it was used by Fender endorsers including Kaye, who posed with it for the publicity photo.

This oft-seen shot of the Mary Kaye Trio, showing her with the Strat, was taken just prior to a show in Las Vegas in early ’56. Unfortunately for Kaye, Randall had other plans for the guitar, and did not present it to her afterward.

She was, however, allowed to use it during the filming of Cha Cha Cha Boom!, in which the Trio performed. And to promote the movie, Columbia did a photo shoot with them during which Mary posed with the guitar, resulting in several movie posters and a lobby card.

Whatever Randall’s reasoning (perhaps a chance for more/better exposure on the East Coast), he kept the guitar until the summer NAMM show in New York City.

Demonstrating Fender’s latest there were steel guitarist Jody Carver and guitarist Johnny Cucci; the guitar he used for the show was none other than this blond Strat, brought to the show by Randall.

Unbeknownst to Cucci (but revealed to Carver), Randall intended to give the guitar to Johnny. At the end of the four-day show, Randall approached Johnny and asked what he thought of the guitar. Cucci told him he loved it. Randall then said, “Well, since you’ve been playing it for four days, we can’t exactly sell it as new, can we?”

Cucci didn’t know what to say. Randall then added, “So we would like you to have it.”

Cucci used the Strat in lieu of his D’Angelico and Gibson Super 400. Unfortunately, the neck later developed a twist. Reluctant to tell Randall for fear he’d appear to be complaining, he revealed the problem only to Carver, who at the time worked for Randall and offered to talk to him about it. Randall offered to replace the guitar, but Cucci declined. So Don instead sent a replacement neck in September of that year, requesting only that the original be returned for inspection.

This explains the nine-month gap between the body date (01/56) and the neck date (09/56). Plus, the string tree retainer is the earlier round style and the tuning machine screws on the back of the headstock are flat-slotted, as on the early Telecasters.

Cucci and Carver went on to record their album, Hot Club of America featuring the Guitars of Jody Carver and Johnny Cucci in Hi Fi, which was released in 1958. On the cover, Carver is shown playing a Fender steel and Cucci plays a blond Stratocaster with gold-plated hardware. The grain of the ash body is so evident on the album cover; there’s little doubt as to whether it’s the same guitar. There is even a subtle dark spot on the neck that matches (a picture of the cover can be seen on page 136 of Richard Smith’s Fender: The Sound Heard ‘Round the World).

After a number of years Carver and Cucci drifted apart. Carver, with a family to support and seeking financial security, went to work full-time for Fender, while Cucci, ever the artist, kept working on different incarnations of his band, Hot Club.

Carver eventually lost touch with Cucci, but in the mid 1980s, after hearing about a radio station that was playing the Hot Club album, Carver tried to track down Cucci to share the news. He eventually located Cucci’s older brother, Louis, only to find that Johnny had passed away in November of ’86. Louis said that when Johnny’s health began to fail, his wife sold all of his guitars, including the D’Angelico and Super 400. The Strat had gone to Guitar Trader, in New Jersey, in early ’82.

From there, the guitar changed hands several times, but its basic condition remained the same, as evidenced in Guitar Trader’s Bulletin from February ’83, which features a full-page picture of the guitar that clearly shows its subtle battle scars and wear (this picture is also in Timm Kummer’s reprint of Guitar Trader’s Vintage Guitar Bulletin – Vol. 2).

After acquiring the Strat, Guitar Trader sold it to Jimmy Crespo (VG, April ’02), Joe Perry’s replacement in Aerosmith, who used it to record rhythm parts on the band’s Rock in a Hard Place album.

The guitar went back and forth between Crespo and Guitar Trader until the late ’80s, whenit was sold to Elliot Mechanic, in Montreal. Mechanic eventually sold the guitar to Michel Begue, who in turn sold it to Ed McDonald of Tundra Music, Toronto.

In June of ’89, The Who performed in Toronto. At the time, the late John Entwistle, bassist for the band and a serious guitar collector, was approached by McDonald about buying an entire guitar collection, which included the Strat. Alan Rogan, The Who’s tour manager at the time, headed up the details. Entwistle, in turn, let Rogan have the Strat.

In the summer of ’95, Rogan used the Strat in a trade to Lloyd Chiate, Voltage Guitars, Hollywood, who kept it in his personal collection until ’98, when he sold it to its current owner.

Up to this point, nobody knew its history – aside from realizing it had to be one of the earliest Mary Kayes. It wasn’t until after the current owner had acquired the guitar that it would give up its secrets.

In retrospect, perhaps this style of Strat would have been more appropriately nicknamed the “Johnny Cucci Strat.”

Be what that may, the moniker of the Mary Kaye Strat will live on, as she is not only associated with this one guitar, but has her name firmly cemented in reference to all Stratocasters in blond finish with gold hardware.

This article originally appeared in VG‘s August 2003 issue. All copyrights are by the author and Vintage Guitar magazine. Unauthorized replication or use is strictly prohibited.