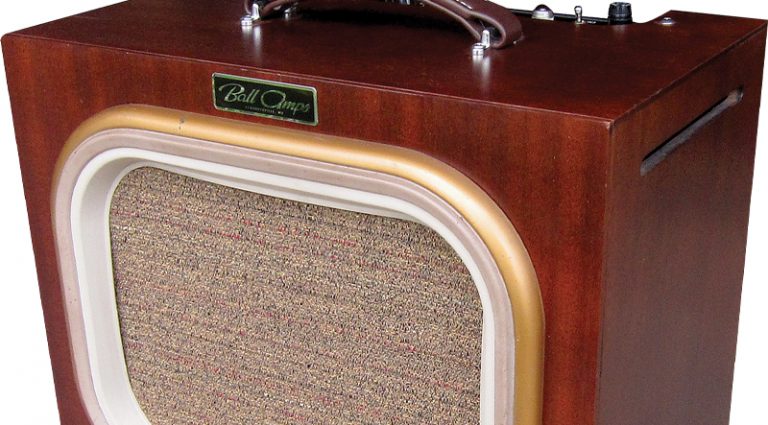 Randall Ball crafts vintage amps like no others. At his workshop in Kearneysville, West Virginia, he translates tried-and-true schematics into new builds, then houses them in old cabinets adapted from radios, TVs, and suitcases. It’s a gimmick, sure, but it’s a darn cool one.

And it’s not just about the looks; it’s all about the tone. Ball constructs amps based on Fender’s famed tweed Harvard 5F10 and Valco’s 510 Supro Supreme, among others. And the all-around aura of the finished creation is oh-so-cool.

Ball’s GE TV amp, for example, is one of a kind. He used the schematics from a 5F2A Princeton, then housed it in a suitably sized 1950s television console. But rarely has a ’58 Princeton sounded so good – and this is where Ball proves it’s all more than a gimmick.

In the re-created tube circuitry, he used Mercury Magnetics transformers, and the amp kicks out approximately 7 watts of power through an 8″ Warehouse Guitar Speakers G8C 20-watter.

Plugging in a ’56 Strat, the tone is downright luscious – warm and woolly. You could almost wrap yourself up in it and keep cozy through the winter.

But more than that, the amp sustains for a crazy-long time. Hit a note or chord, and it just rides on and on into the sunset. Lovely.

The amp boasts two input channels with just two top-mounted controls: Volume and Tone. Overall, its voicing is on that warm side: more rich and resonant than hard-edged and trebly. It’ll overdrive and rock out, no doubt, but it doesn’t get in-your-face aggressive.

And then there’s that cabinet. The GE TV is pure ’50s chic, from the styling to the original knobs (just for looks, although they do turn!) to Ball’s period-perfect grill cloth. It only accentuates the amp’s wonderful sound, making it a classy choice for jazz, country, and blues.