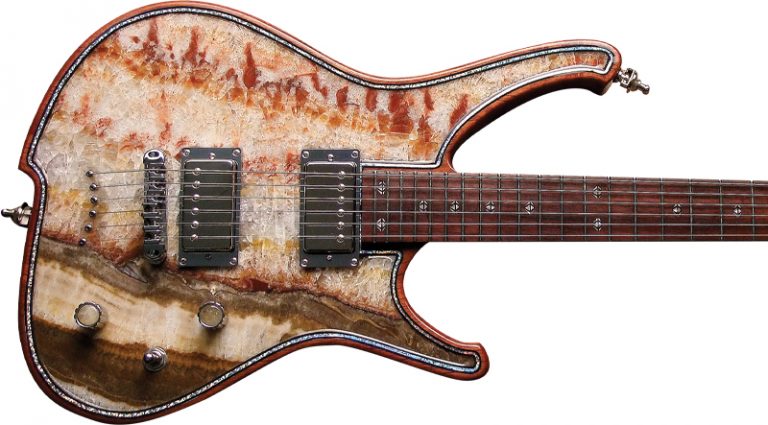 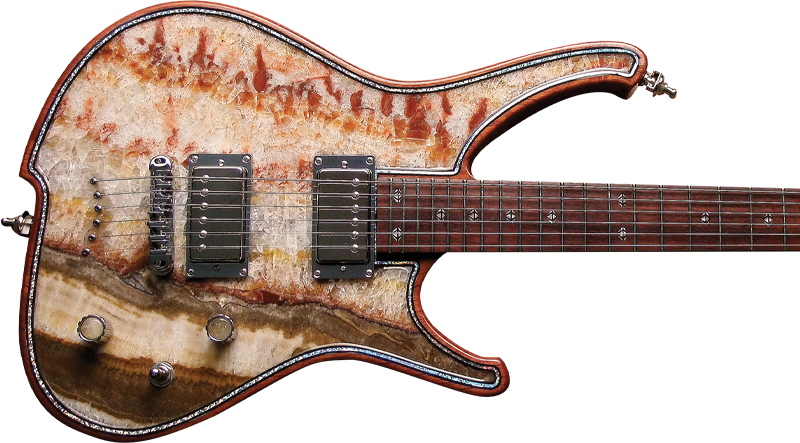 When German luthier Frank Scheucher was first approached about building a guitar from stone, he had the same reaction you’re probably having right now: Say what? It’ll weigh a ton. And even if a player could lift it, does stone resonate – at all?

However, experimentation led to a line of models like this Nemesis. With a stone top just 0.20″ thick and a chambered body of light mahogany, these “Gorgonized” (look it up) guitars from Zerberus weigh seven or eight pounds – no more than your average Strat or Les Paul. The stone is surprisingly resonant, too, allowing vibration in all directions rather than along a wood grain.

Every stone top guitar is unique as a fingerprint, and the test model was cut from a stone found in Mexico and Brazil called Onyx Fantastico Red Light. Yeah. The top is slightly inset in the body and framed by a flecked strip that loves to catch the light. The front edges are heavily shellacked, though the stone itself is less prone than wood to scratching or damage. Overall, the Nemesis has a striking, ornate design, completed by an especially long top horn and Scheucher’s signature wave above the lower strap button (making strap locks a must).

The bolt-on neck is a five-ply construction of maple and purple heart, with a beautiful rosewood plank inset with diamond-shaped markers. The dual strips of purple heart are visible right up through the headstock, with its unusual drill hole at the peak. The scale length is 25.5″, though from playing position it almost looks like a short-scale guitar – probably an illusion resulting from the long horn. It aligns at about the 11th fret, so the neck’s entire second octave is north of that upper bout.

With a flat 14″ radius and D-shaped curvature, the neck feels substantial but not bat-like or bulky; more like a Les Paul neck sanded flat. It’s a finely crafted neck, and plays comfortably and consistently in every position. Also, the sustain on this guitar is exceptional, with credit due in part to the stone and the string-through design. The Wilkinson hardware (locking tuners, roller nut, and roller bridge) deserves a nod as well.

With amp EQ set flat to limit variables, the tone of the Nemesis fell generally in the upper midrange, with less mid-low resonance. Even so, there was a softness on high notes, a welcome attenuation or curbing of those high frequencies that can be wince-worthy on, say, a Tele in bridge position. More range on the Tone knob would have addressed EQ; the pot is nearly indistinguishable between 10 and 2, and then drops sharply between 2 and 0. The master volume, similarly, was off in 0 position and then stepped on around 1, making it tough to get a smooth swell.

Zerberus will load any pickups a customer orders, and this Nemesis came with alnico pickups by the German builder Harry Häussel. Push/pull features on the master Volume and Tone pots enable a lot of versatility with few controls. Pull the volume, and the neck humbucker splits to a single coil; pull the tone, and the bridge humbucker does the same. A favorite setting for us while playing rhythm was middle position with the neck pickup as a humbucker and the bridge as a single-coil, which allowed chords to sound both full and bright. The opposite setting (single-coil neck, humbucker bridge) lent well to a cutting lead tone, good for bold blues lines.

Zerberus makes guitars out of Tiger’s Eye, Smoky Quartz, Aventurine, and other awesomely named gemstones. Each guitar comes with a hard case – and a wow factor you won’t get from a conventional wood top.