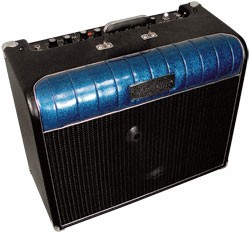 In the mid 1960s, Kustom amps were popular for their cool tuck-and-roll vinyl covering, and their solid tones.

Today, most of the company’s new amplifiers are solidstate and devoid of tuck and roll covering. The exception is its line of tube combos, the ’36 Coupe and the ’72 Coupe, with all-tube circuits and a bit of that cool tuck-and-roll vibe in red, blue, or charcoal sparkle, combined with black tolex, retro-look chrome, and steel handles.

Each amp uses two (’36) or four (’72) 6L6 power tubes, four 12AX7 preamp tubes, spring reverb, top-mounted controls, custom Eminence speakers, and two channels with a shared three-band EQ and individual Bright switches. And each channel has Master Volume and Gain controls, allowing the user to set each for overdrive or clean. Channels are switched via mini-toggle or the three-button footswitch, and the Rhythm/Lead channel indicators are backlit, so you can tell at a glance which is active. The Lead channel is higher-gain, while the Rhythm channel is better for a crunchy overdrive or clean tones. There’s also an adjustable Boost circuit accessed via the footswitch.

Build quality on our review ’36 is very good. Its cabinet uses heavy-duty 3?4″ Baltic birch, a steel chassis, double-sided printed circuitboards, and a perforated steel cage to house the power tubes. On the back of the amp is an XLR recording output with cabinet emulation, Level control, and ground-lift switch, as well as dual 1?4″ effects loop jacks and a speaker-out jack with impedance selector. 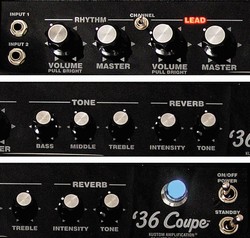 We tested the ’36 Coupe using a PRS McCarty with Seymour Duncan 59 pickups and a Fender Muddy Waters Tele with Texas Specials. Plugging in revealed that the Tone controls on the ’36 are passive – their frequencies will overlap if driven too hard. We found they worked best – and sounded most natural – set just past halfway (1 o’clock). The High control is also capable of creating over-the-top trebles, and when taken past 2 o’clock it essentially buries the mids. The Mid and Low controls don’t overlap as noticeably and can be pushed harder to compensate between humbuckers and single-coils. To our ears, the amp was friendlier to humbuckers, with their subdued highs and boosted mids, which blended very well with the amp’s inherent tones. And regardless of pickups, the pull-up Bright switch adds plenty of sparkling high-end if you want more sizzle.

Overall, the ’36 sounds darker than you might expect, with a pronounced midrange bite, but still offers plenty of ’60s jangle – but not like a 6L6-powered Fender. When its tone controls are dialed in, the amp sounds very nice and requires little adjustment between the rhythm and lead tones. The spring reverb sounds good, and its Tone control lets you tailor reverb sounds from sparkly, in-your-face surf to laid-back “ambiance.” The XLR line-out sounds decent and saves you the hassle of mic’ing the cab.

The ’36 Coupe has an enjoyable, ballsy midrange overdrive sound and respectable fat rhythm/clean tone. It offers a nice change from the myriad of major-builder clones. It’s nice to see Kustom back in the tube-amp business – and back doing tuck-and-roll!