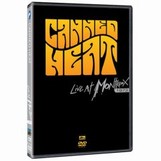 The story of Canned Heat has more twists and turns than Spinal Tap’s evolution from the Thamesmen to Spinal Tap, Mark II. Which is why some of the dramatic, lofty claims in the documentary contained in this double-DVD undermine the amazing tale of the band’s actual achievements and history. “In all history,” the narrator intones, “there is one band that truly revolutionized the blues while living the sex, drugs, and rock and roll lifestyle to the fullest.” Really? The Butterfield Blues Band and Cream weren’t revolutionary? Fleetwood Mac didn’t indulge in its share of sex and drugs?

That statement comes at the end of the two-hour documentary, Boogie With Canned Heat, that comes as a bonus disc with the group’s 1973 appearance at the Montreux Jazz Festival. The live disc has its moments, and includes four songs of Heat backing Clarence “Gatemouth” Brown, but the documentary is what makes this package worth owning.

By ’73, one original member of Heat had died, and there’d been several personnel changes – all detailed in the documentary. Original lead guitarist Henry Vestine had rejoined the group, and the two mainstays, singer Bob Hite and drummer Fito de la Parra, were still onboard. But the reshuffled lineup lacked both the charisma and authenticity of the original quintet, and there are a few trainwrecks, especially during the unrehearsed jam with Gatemouth (though it’s still a treat to see the bluesman at the relatively young age of 49).

But there are moments when things gel – particularly on the hits “On The Road Again” and “Let’s Work Together” and, of course, the Hooker-inspired boogie finale – and Vestine takes flight, with Fito prodding him up, up, and away.

The story of Canned Heat is told by de la Parra, along with interview segments of the band’s original manager, Skip Taylor, and original bassist Larry Taylor (no relation). This is actually the toned-down version of the saga; Fito’s book, Living The Blues – Canned Heat’s Story Of Music, Drugs, Death, Sex And Survival offers the unexpurgated version.

Still, there are passages (absolutely true) that could have been culled from This Is Spinal Tap. The band actually set out to be the loudest group in the world, using Blue Cheer as its yardstick, and ended up with 1,200 watts powering eight 2×15 cabinets – just for Vestine! And, referring to a fight between Taylor and Vestine, de la Parra, says in complete seriousness (with his thick Mexican accent), “Henry had just taken a bunch of downers. That’s the worst time to have a meeting.”

The actual heyday of the band (who played both Monterey and Woodstock) is rushed through a bit, considering its relative import. But, between stories of the deaths of visionary Al Wilson, frontman Hite, and one-time guitarist Hollywood Fats, there is plenty of rare footage of the band playing live – usually unedited, complete songs – with Vestine, Harvey Mandel, and Fats (Mike Mann). Unfortunately, the chronology leaps 15 years forward at the end – skipping the great Junior Watson’s tenure as guitarist – to mention Vestine’s 1997 death.

This article originally appeared in VG‘s Aug. ’07 issue. All copyrights are by the author and Vintage Guitar magazine. Unauthorized replication or use is strictly prohibited.