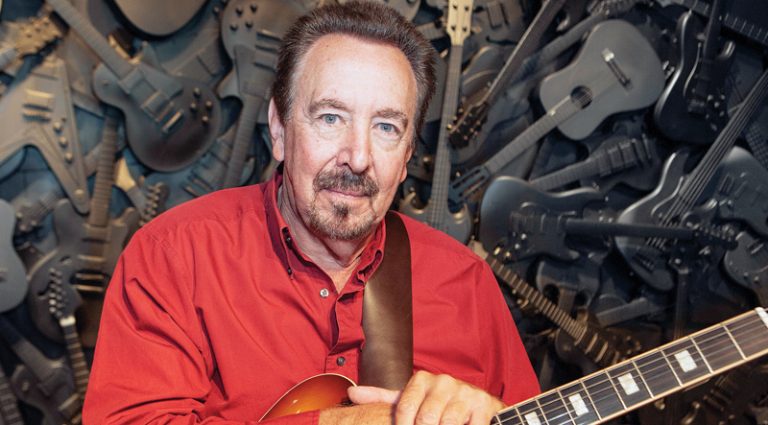 On August 16, 1966, the Beatle-esque guitar riff that opens “Last Train To Clarksville” crackled out of radios across America for the first time. The debut single of the made-for-TV band The Monkees, the song shot to #1, matching the ratings (and timing) of the band’s new network television show. It also marked the hit-song debut of Arkansas native Louie Shelton. The young guitarist had been steadily working his way up L.A.’s session ladder; after “Last Train,” his ear for hit-worthy tones, hooks, and rhythms put him in the top tier of the city’s studio and TV musicians – and kept him there for more than two decades.

From Barbara Streisand to the Jackson Five, Boz Scaggs (Silk Degrees) to Marvin Gaye – to Neil Diamond, Lionel Richie (“Hello”), Smokey Robinson, Bill Cosby (TV), Seals And Crofts (as producer), “The Partridge Family” (where Louie brought in a young Larry Carlton as second guitarist) and many other pop icons, Shelton’s credits land him among the most-recorded musicians of pop music’s ’60s and ’70s heyday, and on the roster of the legendary Wrecking Crew.

“I went to L.A. knowing I wanted to do sessions,” he recalls. “I played steady club gigs in Little Rock, and later in and around Albuquerque. Glen Campbell was from Arkansas, too, and also ended up playing clubs in Albuquerque a little before I got there. By the time I moved to L.A., he was there and already established in the session thing. He got me subbing on a few things, but it didn’t really lead anywhere. We were good friends, though. I eventually played on his records, and his TV show.”

Shelton was balancing a busy demo schedule with club work in Las Vegas when he began playing demos for writers Tommy Boyce and Bobby Hart. The pair enlisted him when they got the call to write for The Monkees, and Louie was off and running.

“I was a different kind of player than the older Wrecking Crew guys,” he recalls. They were readers – they could nail anything you put in front of them. I only read chord charts. And my influences were different. I’d played all the Steve Cropper, Curtis Mayfield, Scotty Moore stuff – I came from that. So I’d come up with intros and fills. If I heard a lick, I wasn’t afraid to play it. Other producers started working that way more, and the demand for that kind of player grew.”

Shelton began his session career with only a ’66 Telecaster and a Super Reverb.

“That was such a great guitar,” he says. “The front pickup had one of the best jazz sounds I ever heard.” As sessions picked up he added a Gibson ES-335 and ES-175, among others.

“I started doing sessions on the Super Reverb, but they kept wanting me to get that break-up, and it was way too loud. I finally got a Fender Princeton Reverb that I still use all the time. It was modified to be like a Mesa Boogie.”

By ’96, with the L.A. session scene cooling and the city feeling “too big,” Louie moved to Nashville and spent nearly a decade there. Since 1986, home base has been Australia’s Gold Coast, where he’s a fixture at the region’s many festivals and clubs, produces projects, and records his own albums.

Shelton’s latest CD is Bluesland, on his own New World Jazz & Blues label. It features guest vocals by his old pal Scaggs and longtime Wrecking Crew mate, the late Leon Russell. Throughout, the unmistakable tone, phrasing, and pocket-perfect time make two things clear; Louie is still at the top of his game, and his influence on guitarists riding the jazz-tinged pop wave of the ’70s and early ’80s was profound. Bluesland is a sampler of the just-breaking-up tones, ghosted bends, and melodic cool that inspired countless players and reflects much of what Shelton loves about the Gold Coast.

“We have a lot of big festivals, with lots of blues and jazz… that’s the best fit for me, and they’re always packed. The clubs are huge, most with casinos, and a place upstairs for music. People here still love live music. It’s a great scene. I produce independent artists, too, and like me, they can make a living if they learn to market and use the internet. The ’net is a great learning tool for musicians, too. So it’s not like the old days, but it’s good.”

Shelton’s original Princeton Reverb still gets heavy use, and his go-to guitars are a Mexican Tele and a Gibson ES-339. He’ll occasionally employ a Stratocaster, or an archtop like his Mark Lacy Louie Shelton model.