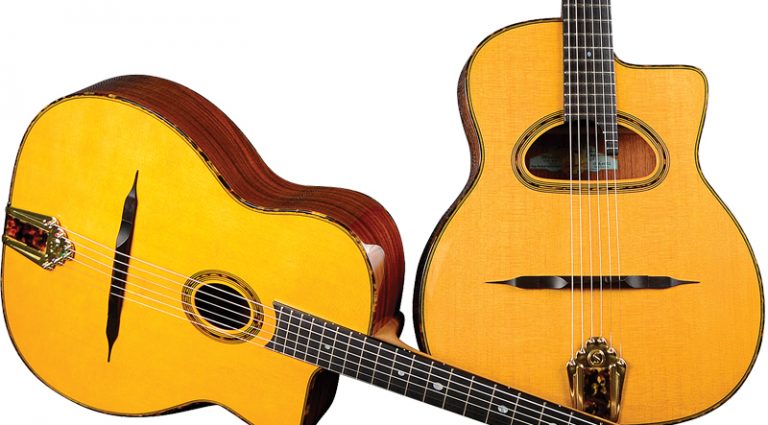 John Jorgenson boasts not one, not two, but three signature-model guitars – one for each style he excels at: bluegrass, hot country, and Django Reinhardt’s Gypsy jazz. In fact, two Selmer models in Saga’s venerable Gitane line bear his name.

Jorgenson needs little introduction. His Django-esque picking has won raves from fans worldwide – so much so that he actually plays Django in the 2004 film Head in the Clouds.

Saga’s Gitane line runs from excellent beginner guitars to professional models like the Jorgensons. The guitars are faves with those just starting out and with gigging musicians. While an original 1940s Selmer will set you back $20,000-plus and were fragile guitars from the start, Chinese-made Gitanes are affordable and rock-solid.

The DG-300 is a petite bouche like Django used later in his career: the small, oval soundhole is favored for projecting solos. Jorgenson’s DG-320 is a grande bouche as used by Django’s rhythm players – except Jorgenson one-upped them. He designed this large-soundhole guitar with a neck featuring 14 frets to the body rather than the 12 of corresponding Selmers, making the DG-320 the best of both worlds – a Gypsy guitar ideal for both rhythm and lead.

Both models feature a solid Sitka spruce top and lighter bracing under the soundboard to vibrate more and create a sweeter, fuller sound. The sides and back are laminated Santos rosewood, as on original Selmers, and the bodies are bound in subdued and stylish tortoiseshell plastic.

The walnut necks and ebony fretboards are also shaped to Jorgenson’s specs, with a faster profile and a thicker fretboard to facilitate a Stimer-style soundhole pickup.

Original Selmers were designed with a piercing, trebly tone – the better to be heard through a full band and in the recordings of the day. Jorgenson wisely revised his models for a lush, warm tone befitting the modern era. Django would be jealous.