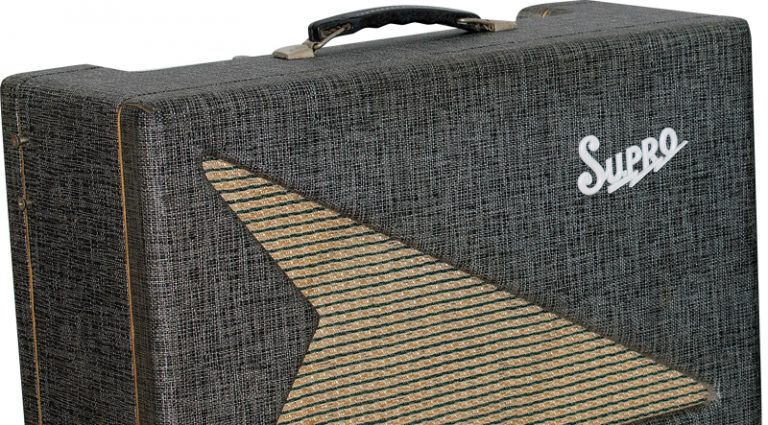 Supro amps from the late 1950s and early ’60s are some of the most stylish of the era, and boast circuits that generated classic tones at the hands of a young Jimi Hendrix, along with Alvin Lee, Jimmy Page, and countless Chicago blues stars. But good luck finding a set like this.

After years of “also ran” status, Supro’s place among elite vintage American-made amps is now more secure, and few are more enticing than this pair. VG reader Chuck Keenan is their lucky owner and tells us that while the 600 Reverb unit is rather common, the 1600R amp designed to pair with it is extremely rare.

“In years of looking, I’ve only seen two 1600R amps, and never [together] with the reverb unit, which doesn’t work well with other amps,” Keenan said.

For whatever reason, in ’62 the 1600R was moved to Supro’s more-traditional rectangular-front cabinet while the 600 Reverb retained the triangular grille. While odd given they were marketed as a set, Supro perhaps decided it was too much to expect many buyers to simultaneously spring for both. In ’61, the amp sold for $109.50 while the reverb unit commanded $145 (footswitch included, but another $6 each for the slip covers). By comparison, Fender’s Super Amp of the same year cost $244, while the Deluxe cost $139, though neither had reverb (no amp from Fender would until ’63).

Like certain other makers, Supro’s approach to reverb was different in the early days. Rather than being an effect through which signal passed for treatment on the way to the amp, the 600 was, in fact, a stand-alone reverb/amplifier with its own output stage and 8″ Jensen speaker, in addition to the spring pan responsible for its watery delay sound. To use the pair in tandem, the 600 connects to the 1600R’s Accessory Reverb Unit Input, which would more correctly be described an “output” because it taps a signal from the secondary side of the same output transformer that feeds the amp’s own 10″ Jensen. Upon entering the Reverb unit’s input, that signal is attenuated by a large resistor, fed to the spring pan, out the other side, then amplified by a 6EU7 driver into a 6V6GT output tube and its own output transformer. An Intensity knob is essentially the Reverb’s volume control, while a two-way Contrast Switch taps a bypass network to render the effect weaker or stronger.

“The reverb unit adds depth and imaging when spaced about two feet from the amp – any further and it gets a little odd… unless you’re Roky Erickson [in The 13th Floor Elevators],” said Keenan. “It’s a bright, saturated tone with not too much depth or dwell. And it really can’t run past noon [on the dial] before feedback rears up. It’s clean, bright, surfy, and spooky all at once.”

So, a fast-track to “The Magic of Concert Hall Sound,” like it says on the unit’s control panel? Perhaps not entirely – a cool effect, something of a novelty, but not the lushest and most dimensional spring reverb compared to later standard bearers like Fender and Ampeg.

The amp, on the other hand, is killer – as are many similarly configured amps of the era. Essentially a streamlined single-channel rendition of the circuit in the Supro Model 24, it’s replicated fairly closely in other Valco-made amps like the Gretsch 6156 Playboy we profiled in ’09. This one also lacks the character-laden tremolo of others but otherwise packs all the meaty Valco goodness.

All three inputs – two labeled Bass, one Treble, link to the same first gain stage provided by half of one of the amp’s two 12AX7s. From there it dives into the second 12AX7 in the paraphase inverter via nothing more than a single .005-µF coupling cap and the Volume pot, with a simple treble-bleed Tone control tapped on the side. A lot of the Valco mojo occurs in the components, including ceramic-disc caps that add grit and texture. But that phase inverter has its own thing going on, too. Abandoned by Fender as archaic in the mid ’50s, Valco left the paraphase inverter in many designs for another decade, and it contributes squashy compression along with early break-up.

Heading out the other side of the PI via another pair of ceramic-disc caps, the signal encounters one of the other major components of Valco tone – a pair of 6973 output tubes. Easily mistaken for their slim nine-pin brethren, the EL84, these American tubes sound very different from their British cohorts, offering bold, thick midrange, robust low-end, and potentially more power – so much so it’s optimistic to think its Jensen C10R will stand up long to a full 17 watts (the 6973s could deliver even more wattage if mated to a higher-rated power transformer).

As is, the 1600R doesn’t pack bountiful lows or substantial headroom, but it’s a gorgeous little rock-and-roll machine with an aggressive bark when the guitar is hit hard, and a beefy corpulence when it segues to distortion. It’s an extremely tasty little package on its own; paired with the 600 Reverb, it’s the stuff of retro-toned dreams.