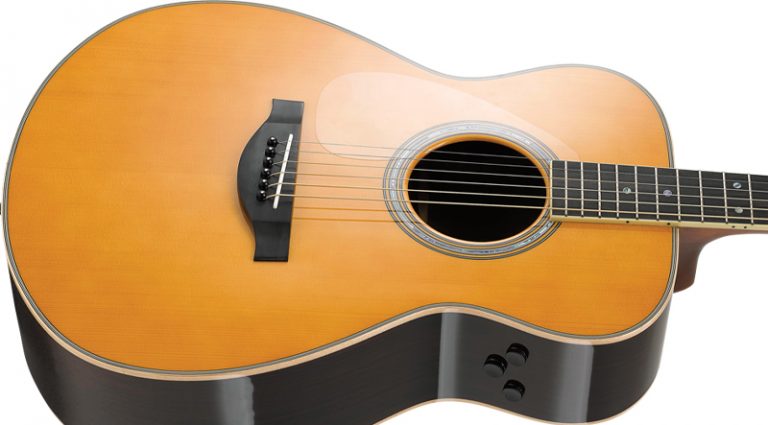 Every once in a while, an instrument or piece of gear emerges that knocks the socks off. Yamaha’s TransAcoustic is one such axe.

The TransAcoustic is a dreadnought (the company calls it Original Jumbo) with solid rosewood back and sides and a solid Engelmann A.R.E. spruce top (Yamaha’s Acoustic Resonance Enhancement aging treatment). The box sports a mahogany neck with two decorative rosewood stripes in the back and a scale of 259⁄16". Maple binding on the body is a nice touch that complements a black/white/abalone rosette.

The guitar’s 20-fret fingerboard is ebony with a flat 235⁄8" radius and abalone dot inlays. Other features include a urea nut and saddle, gold tuners, and a transparent pickguard. In all, this is a decent acoustic with an excellent neck and moderately lively top.

But what about that “secret weapon?”

Three controls on the upper bout are part of the TransAcoustic’s System 70 preamp; push and hold the bottom one to activate the under-saddle piezo pickup (powered by two AA batteries mounted in the endpin jack), then increase the other two knobs and suddenly the mellifluous sounds of reverb and chorus waft through the air. But wait…. Where’s the amp? The TransAcoustic actually has its own amp inside its body. Shine a flashlight through the soundhole and you’ll spy a mini speaker/driver strapped between two of the back braces. In effect, the driver uses the dreadnought body to amplify and project the sound.

In tests including private practice and a full solo-acoustic gig, the Trans LL-TA proved a workhorse. For solo jams, it’s something of a game changer for its ability to go on the back porch and play with full-on reverb and chorus effects – without external cables. It’s harnessing new potential in a guitar.

The Line Out Volume knob acts as a blend between fully acoustic and processed tones. The reverb is surprisingly lush and warm, while chorus is sweet-toned and not harsh.

All this would be moot if the LL-TA itself wasn’t a nice acoustic, especially the neck. With that flat radius and excellent setup, the fingerboard is super-fast, comfortable, and has a low, buzz-free action. The guitar’s natural projection is good though not remarkable, but when you combine the superior neck with the speaker and preamp, you may only play it unamplified on rare occasions.

Speaking of, the preamp supersedes the speaker when you plug a ¼" cable into the endpin and send it to a PA or acoustic amp. This gives the player the option of using the Yamaha’s internal effects through the PA or turning them off for outboard processing. The chorus and reverb work equally well internally or externally.

Like the first time you surfed the internet or talked cross-country on a smartphone, with the TransAcoustic you might sit back and realize the world has changed. Other companies are experimenting with methods to combine amp-free digital effects with acoustic/electric guitars, but the LL-TA does so hassle-free and with a price tag that’s hard to beat. Just push down that Volume button and wait for the effects and driver to kick in. After that, it’s almost magical. Bravo, Yamaha.