The 1935 article includes a photograph showing the suave gentleman demonstrating the instrument (to a young woman), roughly the size of a cello, and includes Tutmarc’s story of carving it from white pine.

Tutmarc had already founded Audiovox Manufacturing Company and was producing at least one of what would ultimately be three models of electric lap-steel guitars (all with an electromagnetic pickup designed by him and Art Stimpson), along with at least one of an eventual array of small amplifiers. But the photograph also illustrates technological progress in the form of a large bass amplifier complete with a lightning-bolt graphic on its grille.

While it’s unfortunate the set has not survived for posterity (and forensic examination), Tutmarc’s son, Paul, Jr., recalls that the last time he saw either – probably in the ’40s – the neck of the bass was hanging on his father’s studio wall, and the pickup (“…wrapped up in a ball of friction tape about the size of grapefruit…”) was resting ignominiously in a junk drawer.

The set was impressive for its time, and the feature deemed the elder Tutmarc successful in his efforts to create an instrument that was smaller, lighter, and louder than a standard upright acoustic bass.

“People have always pitied the poor bass-fiddler… who has to lug his big bull-fiddle home through the dark streets after the theatre closes,” it said. “But he doesn’t have to do it any more. Because Paul Tutmarc, Seattle music teacher and KOMO radio artist, has invented an electric bull-fiddle. One you can carry under your arm. The first electric bass-viol is only four feet tall, instead of six. It could be made a lot smaller, but Tutmarc didn’t want to be too revolutionary right off the bat. Bass violinists are a conservative race, and have to be accustomed gradually to the idea, he says.”

The latter was, of course, an understatement. Though Tutmarc would revise the instrument and Audiovox would produce its model 736 Electric Bass Fiddle and 936 Amplifier, neither would sell very well. It seemed an instance of an invention arriving ahead of demand, and the saga of how Tutmarc made several pioneering contributions to electric-guitar design was destined to remain obscure to the extent that, in the wake of Leo Fender’s Precision Bass being released in November of ’51, the very existence of a previous electric fretted bass (played horizontally) was effectively forgotten – except within the Tutmarc family. 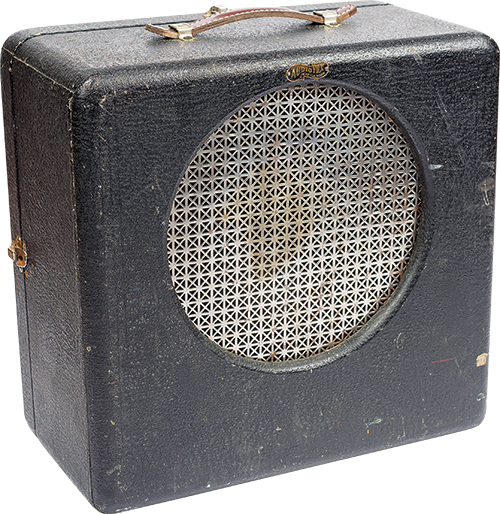 Yet, as the years passed, interest in Audiovox instruments quietly grew with the gradual emergence of several models of lap-steel guitars with matching amps. The 736 basses, however, have remained elusive, with only three publicly known to still exist, while a mere two 936 amps have been counted.

The 736 is 42″ long, with a body made of black walnut and a neck-through design with 305⁄16“-scale/16-fret neck and ebony fingerboard. It has the Tutmarc-Stimpson horseshoe pickup, a mirror-steel faceplate, and single Volume knob. Tutmarc initially marketed the instrument circa 1936 and did the woodwork in his basement shop, then later jobbed it to local cabinetmaker Emerald Baunsgard. He came to similarly rely on other professionals; electronics-buff pal Bob Wisner designed amp circuits based on existing radio technologies, and Frank Galianese covered amp cabinets with linen.

An Audiovox sales catalog from the era boasts how the 936 – which originally sold for a whopping $95 – provided an equally whopping 18 watts of power at three percent distortion through a 12″ Jensen Concert Speaker. The specimen shown here instead has the later upgrade – a 10″ Jensen Model A-12 High Fidelity field-coil Concert Speaker. And while the catalog also notes the amp had a “chrome chassis with 3 different tones & 2 inputs,” this chassis has (from left) an on/off switch; ¼” input jack, a hole (input, perhaps?) plugged with a rubber washer, octagonal Volume and Tone knobs made of Bakelite, and a green-glass power light.

The story of the once-obscure Audiovox company first came to light in the run-up to the grand opening of the Experience Music Project (EMP) in June of 2000. In conceiving and planning its “Quest For Volume” exhibits on the history of the guitar, curator Peter Blecha conducted research, acquired instruments and other artifacts, and wrote labels for various items in the exhibit. The display included a handful of items made by or relating to the brand.
In the midst of the effort, the March ’99 issue of Vintage Guitar included a pair of essays (Blecha’s “Discovered! The World’s First Electric Bass Guitar” and “Fender Myth Debunked,” by John Teagle) that explored what is today widely acknowledged as the first commercially available solidbody electric bass guitar, the Audiovox 736 Bass Fiddle.

But the EMP exhibit and those essays benefitted from longer research by Blecha. As an independent historian, he gained credibility by producing and promoting exhibits about the history of music in the Pacific Northwest. It was at one of those in 1984 where he first crossed paths with an attendee named Paul Tutmarc, Jr., a.k.a. “Bud.” The two spoke, and Blecha was fascinated to learn details about the accomplishments of Tutmarc’s father – and astonished to lay eyes on a 1935 photograph of the Tutmarc family band, including his mother playing a four-string bass.

“In those times, it was still relatively easy to acquire Audiovox lap steel guitars and small amps,” he said. “Nobody seemed to want them! Guitar shops often shunted them to dark corners with other unwanted oddball instruments. So, over the following decade, I amassed a collection surpassing the two-dozen mark, made up of three models of lap steel and four models of amp.”

His efforts included a diligent search for an Audiovox bass. Finally, in 1996, a white-enameled example surfaced at Jake Sturgeon’s appliance-repair/used-guitar shop in Tukwila, Washington (and has been showcased at EMP ever since). Also that year, Blecha penned a booklet titled Wired Wood: The Origins of the Electric Guitar for the EMP, which included the first contextual telling of the Audiovox story.

The research continued and a couple years later Blecha reeled in a matching 936 amp for the museum’s collection; the set has since been ogled by more than a million visitors.

Several years ago, another 736 bass (along with a 436 lap steel) turned up at Gruhn Guitars, in Nashville – the first one that proprietor George Gruhn had acquired in his 40-plus years dealing in rare vintage instruments. It was quickly sold.

In 2001, the bass featured here emerged from an antique shop in Eugene, Oregon. But the effort to locate a matching 936 amp required another dozen years before it surfaced at Guitar Maniacs, in Tacoma. Today, it is reunited with the bass it was born to accompany.