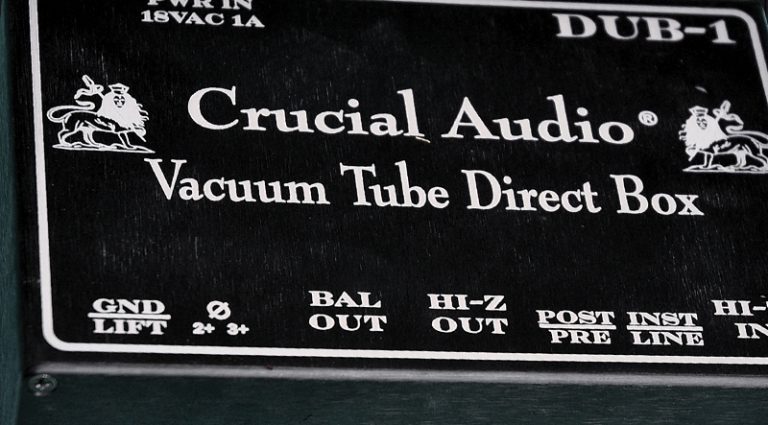 It’s not uncommon for novice guitarists to seek out stompboxes with zillions of features. As guitarists mature, however, they learn to chase something more important – sounding good. Crucial Audio’s DUB-1 is a direct box that does just that, with minimal controls, high-grade components, and a Ruby 12AU7 preamp tube.

Better still, the DUB-1 can be used in several ways. Guitarists might put it on their pedalboard to warm and fatten their guitar’s output signal, especially if they’re using a solidstate modeling amp or a straight-to-PA setup. For that, simply plug into the Hi-Z jacks (with the Pre/Post switch acting as a bypass or on) or run the XLR balanced output to the mixer. The Hi-Z input also has a 15dB pad and there’s a Ground/Lift switch to control extraneous noise. Hit the mini switch to choose Instrument (guitar or bass) or Line inputs (like a keyboard). Funkadelic four-string hero Bootsy Collins uses a DUB-1 to make his bass sound huge and clean, while an acoustic-electric guitarist might deploy it to smooth out the harsh treble that can plague piezo-pickup systems.

The unit’s wide frequency response (30Hz to 110KHz) contributes to the sonic accuracy of a picked note, and military-grade construction is ideal for live work.

The DUB-1 was tested with a Tele-style guitar and electric bass, both through a generic solidstate modeling amp. The results were dramatic. Thanks to the 12AU7 and circuits, all the harsh, trebly transients were smoothed out, giving warm, silkier sounds. For those wanting an amp or PA to sound more tube-like, this is an excellent tool. The DUB-1 doesn’t have a lot of “features,” but it does the single most important job any gizmo can – make a rig sound better. That’s why pro players are all over this box.