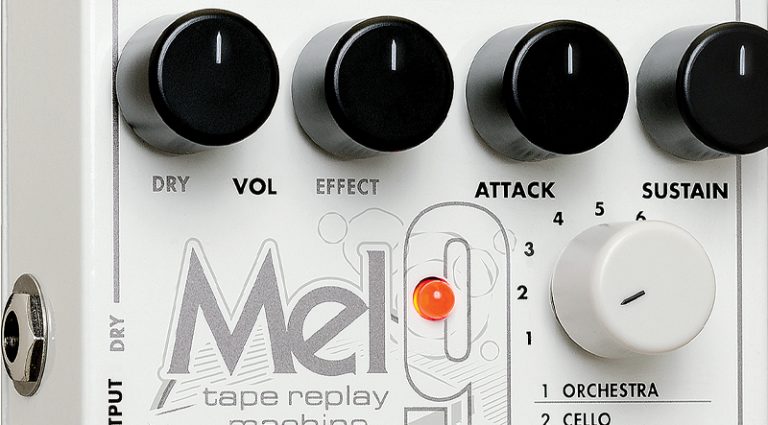 Producer George Martin was so fond of John Lennon’s tape-relay keyboard that he described it “as if a Neanderthal piano had impregnated a primitive electronic keyboard, and they’d named their deformed, dwarfish offspring ‘Mellotron.’” Finicky, phased, and frequently out of tune, the Mellotron really is something of a problem child – but a well-loved one. Electro-Harmonix has put its sounds (and some of its finickiness) within reach of guitarists by way of the Mel9.

Imagine a keyboard made up of Play buttons froxm 35 cassette answering machines and you’ll have an idea of how a Mellotron works. Depressed, a key produces a short and wonderfully imperfect tape recording of an instrument (or section of instruments). Nine of the most widely used Mellotron sounds – Orchestra, Cello, Strings, Flute, Clarinet, Saxophone, Brass, Low Choir, and High Choir – are re-created in the Mel9. Best known is the Flute as heard on “Strawberry Fields Forever.” The Cello sound, too, with its yawning bottom and fixed vibrato, is spot-on Mellotron as heard on Radiohead’s “Airbag” and Oasis’ “Wonderwall.”

Also true to the original, the Mel9 can be temperamental. Attack and Sustain dials control how rapidly the wet signal enters and decays, but notes can still swell unexpectedly or drop off in steps, and nuanced playing (e.g., a light trill or fingerpicked pattern) can go unregistered. Keeping an audible amount of dry signal in the mix helps, and EHX acknowledges the need to “pay attention to performance gestures.” EHX also recommends putting the Mel9 first in an effects chain, as it’s sensitive to incoming levels, though a compressor stabilizes its response.

The Mel9 requires some coddling but the genuine Mellotron tones it produces can be worth the work. “That is you can’t you know tune in. But it’s all right.”