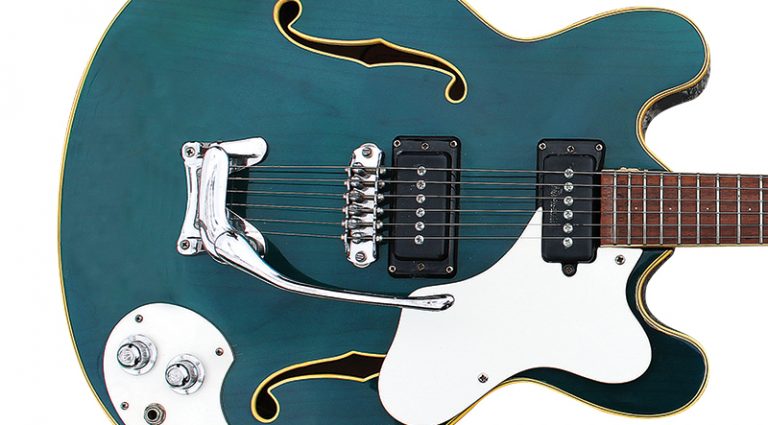 Semie Moseley always wanted to be a gospel singer/guitarist. When he wasn’t crafting Mosrite guitars, he could often be found on the road with an evangelist, providing music for crusades. So, it wasn’t surprising that the now-legendary luthier’s aspirations and beliefs were manifested in a tangential line of instruments carrying the Gospel brand.

Gospel guitars were mostly variations of Mosrite models and debuted in a catalog that touted the ’68 line with a six-string that looked much like the Mosrite Celebrity CE Mark I Model 202 (2 3⁄4“-deep maple body, two pickups, silo-shaped saddles, vibrato, bolt-on neck, bound-rosewood fretboard with zero fret, truss rod with adjustment at the headstock, 24 1⁄2” scale) but had step-up features including multi-ply binding on a bookmatched top, bound soundholes, and “…an unusually outstanding natural finish with a golden brown tinted headpiece.”

Elsewhere in the catalog, the full-depth Mosrite Celebrity had master Volume and Tone knobs, pickup-selector toggle, and an input jack on a palette-shaped plate, while the Gospel version had separate Volume and Tone controls for each pickup. A Gospel-branded 12-string guitar and short-scale bass were listed, but not shown.

Mosrite also made a few Gospel solidbodies based on the Mark V Model 101, perhaps to use leftover parts. Known as the Ventures II when the Ventures endorsed Mosrites, the Mark V was a budget model with smaller basswood body and shorter cutaway horns. It initially had a flat body, but, after approximately 30 were made, it was given German a carve that was less-pronounced than on other Mosrites. Other features included a 22-fret rosewood fingerboard on a maple neck, and a 24 1⁄2” scale. The Gospel version had Japanese tuners and lacked the peanut-shaped neck plate. Its four neck bolts passed through threaded ferrules.

Following the closure of his factory in Bakersfield in ’69, Moseley returned to custom building. In the early ’70s, he made at least one Gospel guitar based on the full-depth Celebrity hollowbody. Its electronics included a pickup toggle on the upper treble bout, and Volume and Tone knobs mounted from inside (with no plate). It was given three-ply binding on the top, single-ply on the back, and no binding on the f holes. Its Mosrite humbuckers had two rows of polepieces, and it was finished in a color similar to Fender’s Antigua.

One unique Gospel was a ’77 Bicentennial Celebrity built for a preacher named Beatty. Moseley made its neck (which runs to the bridge) using a 1⁄4” x 3⁄4” brass rail, and embedded the frets in it. Its hollow maple body is 16″ wide at the lower bout and 23⁄4” deep. The fretboard is rosewood and maple, while its zero fret and nut are brass. He further dressed it with a rosewood headstock overlay and eight-ply binding on the top and back. Controls include Volume and Tone for each pickup, pushbutton switch for phase, and coil taps for each pickup.

By the ’80s, Mosrite and Gospel guitars were being built in Jonas Ridge, North Carolina, and Semie was using gospel-music magazines to advertise the new Victory series – the I (plain pickups, no pickguard), II (pickups with visible polepieces, pickguard), and III (flat body, no vibrato).

In the early ’90s, Moseley relocated to a converted Walmart in Booneville, Arkansas. Sadly, though, production there had just begun when Moseley was diagnosed with multiple myeloma. He passed away on August 7, 1992. The factory closed the following year.

More recently, the Gospel brand was revitalized by Hallmark Guitars, which has designed and built Gospels based on the classic Mosrite silhouette and with pickups wound in-house.

While Moseley loved making Mosrite guitars, his Gospel instruments often received even greater attention to detail. Most are one of a kind, and stand as exquisite examples of Moseley’s prowess.

This article originally appeared in VG November 2018 issue. All copyrights are by the author and Vintage Guitar magazine. Unauthorized replication or use is strictly prohibited.