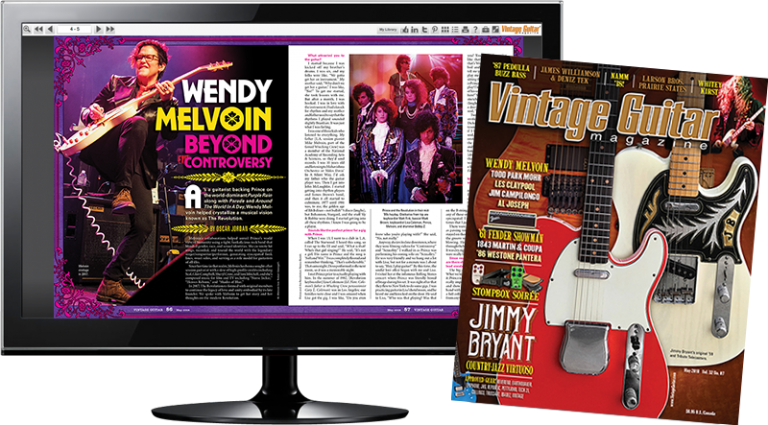 36 Retail Rarity
1843 Martin & Coupa
Key to C.F. Martin’s success in the 1830s was the collaboration with agent-sellers in New York City. Here’s an example from one of the most successful efforts, with rare body size and a host of interesting details. | By George Gruhn and Joe Spann

40 Guitar Lib
The Westone Pantera Deluxe X350
Combining several strands of history, it reminds us how the electric guitar freed builders from constraints like bracing, marquetry, or even the Spanish shape. It all meant guitars could look like anything – from a “frying pan” to this elegant example. | By Michael Wright

44 Fast and Fretless
The Pedulla Buzz Bass
Introduced in 1980, it’s one of the most-enduring examples of an upscale model offered fretless. Created with the input of two notable locals, it all started with a not-insignificant faux pas. | By Willie G. Moseley

48 The Show Must Go On
Fender’s 1961 Showman
When Fender stepped up from the tweed-covered amps of the ’50s to radically redesigned Tolex amps of the ’60s, one of the biggest leaps was in the “piggyback” head-and-cabinet sets. This was the best example of how the company answered the players’ call for a powerful, professional rig. | By Dave Hunter

86 Wendy Melvoin
Beyond Controversy
Her collaborations helped unveil Prince’s world view of humanity using a funkalicious rock band that blended gender, race, and sexual identities. She has since been a sought-after session player with a litany of credits, and today continues the legacy in The Revolution. | By Oscar Jordan

96 Jimmy Bryant
Country-Jazz Virtuoso
It could only happen in California – the harmonic convergence of a guitar-slinging war hero with a newfangled Fender poised to change the world. But that’s exactly what went down when Leo Fender strode into a cowboy bar on the outskirts of Hollywood one day in 1950. | By Wolf Marshall

56 The (Way) Back Beat
The Rod and the Staff: The Larson Brothers’ Prairie State Patents | By Peter S. Kohman

76 Shop of Hard Knocks
Double the Fun: Six Become 12, DIY-Style | By Will Kelly