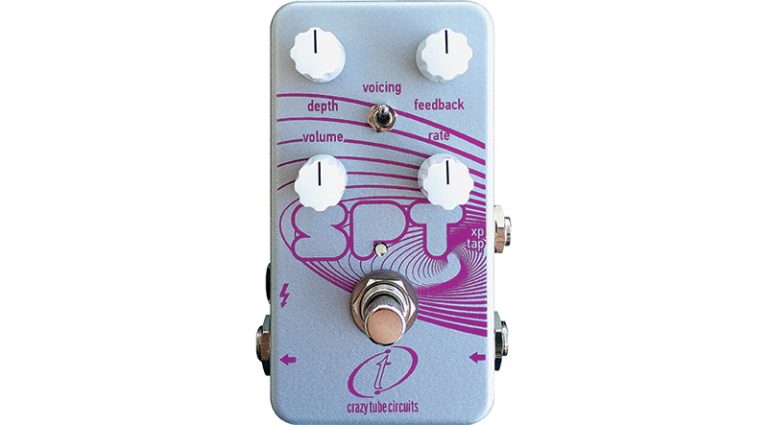 The modal mellowness of Apollo’s lyre or the perky chirp of the bouzouki might come to mind when one thinks of Greek music. But Crazy Tube Circuits? From the Athens not found in Georgia, the CTC Spiral Turbulence (SPT) pedal combines a phase shifter and vibrato.

An on/off stomp switch, single-throw mini switch, and four knobs in a small metallic-finish box tell the tale – simple, straightforward, and functional. The mini switch selects between phaser or vibrato functions, while knobs for Volume, Depth, Feedback, and Rate control the loudness, intensity, and speed of either setting.

In phaser mode, adjusting the Depth and Feedback knobs produced everything from mild fluctuating fizz to deep, dark swirling walls of sound lending an ominous feel to minor-key chord progressions. Plenty of useable voices can be found through experimentation, including a setting that achieves an envelope-filter effect at the end of single-note phrases. It’s an interesting solo device.

Swapping the swampy for the psychedelic, the SPT’s vibrato sound has enough adjustability to go from subtle boogaloo organ-like funk to a downright in-your-face extreme throbulation. Even at intense settings, it minimizes that Huey-coming-in-for-a-landing flutter that can translate as nonmusical chatter.

One of the SPT’s secrets lies in the manipulation of half-sine/half-triangle-wave low-frequency oscillation (LFO), which give the all-analog pedal an organic voice. The expression-pedal jack allows the SPT to be controlled like an organist works a Leslie, though you might draw a glare from your keyboardist when you invade that territory.

Compact, yet capable of complex sounds with multipurpose applications, the SPT is an excellent choice for a versatile pedalboard.