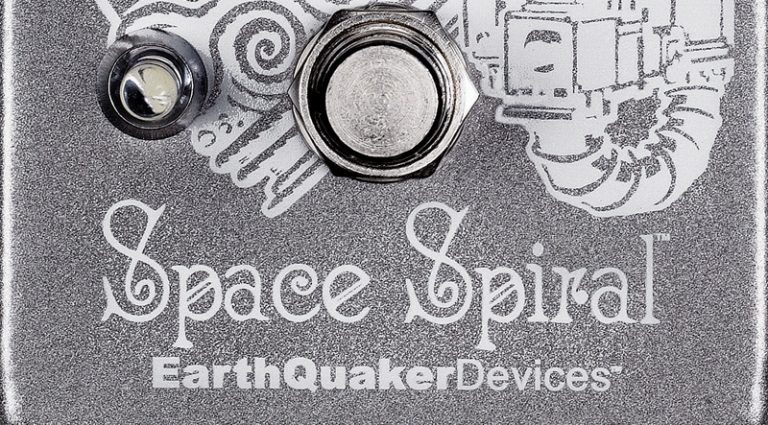 One particularly well-worn joke about playing a bad note advises you to play it twice so folks will think you meant it. But what about all those good notes that actually warrant repeating? Enter the Space Spiral Modulated Delay from Akron’s EarthQuaker Devices.

The folks at EarthQuaker are into hip graphics and designs as simple as the one-knob Acapulco Gold distortion and as complex as the Space Spiral. True, plug-and-play with the Space Spiral is easy enough by simply concentrating on the top row of knobs – Time, Repeats, and Mix – to set up basic slapback, rhythm guitar accents, and delayed solo details. But the three bottom knobs are where the big fun begins.

Depth, Shape, and Rate knobs bring the pedal into modulation territory, where old-school tape delays live when their tape and motor functions are showing some wear. The Shape knob controls the soundwave profile. Turning it hard right works better for slapback-type delays, producing an attack with definitive edge. The impact of the Shape knob becomes more dramatic when Depth and Rate are increased, with different wave forms creating textures neither flange nor phase, but somewhere in those sound families. Just a small tweak of the Depth knob can cause a pitch-shifting reaction in the repeats far beyond a simple chorus, but selecting several settings using all three bottom knobs produces remarkable orchestral textures – along with some unreal, space/industrial effects.

The Space Spiral marries dependable digital delay from 30ms to 600ms to a warm analog voice, true bypass from top-mounted input to output. The extreme guitar enthusiast searching for unique sounds for sampling or looping will find an encyclopedia in the Space Spiral. With the even the simplest settings, the Space Spiral offers a fat sound, easily coaxed into a luxurious lushness with a twist of a knob, making anything played once worth repeating.