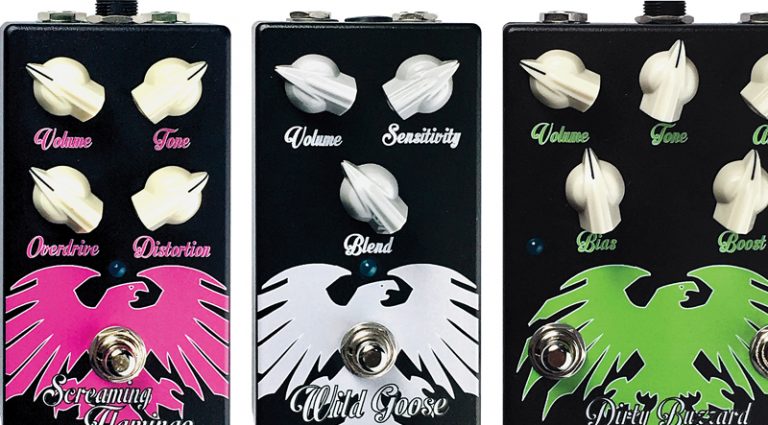 AJ Peat is in the business of creating some of the hippest music gear on the planet. Boutique guitars, pedals, and audio devices all bare his thumbprint, and his take on the classics have attracted artists such as Jim Heath, Junior Watson, and Warren Haynes. His Screaming Flamingo overdrive, Wild Goose compressor, and Dirty Buzzard fuzz are three in a diverse lineup of true-bypass signature pedals.

The Screaming Flamingo is a two-stage overdrive with upscale fidelity that doesn’t mask the true sound of your rig. It utilizes Peat’s proprietary three op-amp configuration to offer discerning tonesmiths a variety of dirty colors. Four chicken knobs (natch) for Volume, Tone, Overdrive, and Distortion allow guitarists the flexibility for everything from clean boost to hard rock saturation housed in a sturdy black enclosure with a nifty pink graphic.

Used with Fender blackface combos, the Flamingo produced Marshall-style crunch with a predilection toward low-mid frequencies. The overdrive circuit supplies plenty of adult grit for chunky rhythms, while the distortion side saturates without obliterating the base tone. Used together they provide a throaty scream, with the overdrive adding just the right amount of top-end. The Screaming Flamingo leans toward the warmer side of the crunch zone. It works for high-velocity blues with a Strat, but shines equally well when dimed back for smooth Les Paul-flavored Allman tones.

The Wild Goose is a low-maintenance compressor that can tighten tones, boost signal, or attenuate. Volume, Sensitivity, and Blend knobs affect output, compression level, and mix of wet and dry. Loosely based on ’70s European compressors, its Blend knob is the key to tonal perfection.

Small and solid, the Wild Goose uses little real estate on a pedalboard while adding a rugged earthiness that can focus a flabby amp or provide a facelift to the existing overdrive. Blend adds volume in addition to wetter sounds, but can be backed off with the Volume knob for more-pronounced compression. It induces a compulsion for clean chicken pickin’. Use it with the Screaming Flamingo and you’re sculpting with a laser instead of a putty knife.

The Dirty Buzzard reimagines classic NOS germanium and silicon fuzz, straddling the ground between fuzz and overdrive. Its Boost switch helps maintain tone without coloration, and it easily cuts through a cloudy onstage mix.

AJ Peat’s effects have a charismatic voice, charm, and unique personality worthy of any rig.