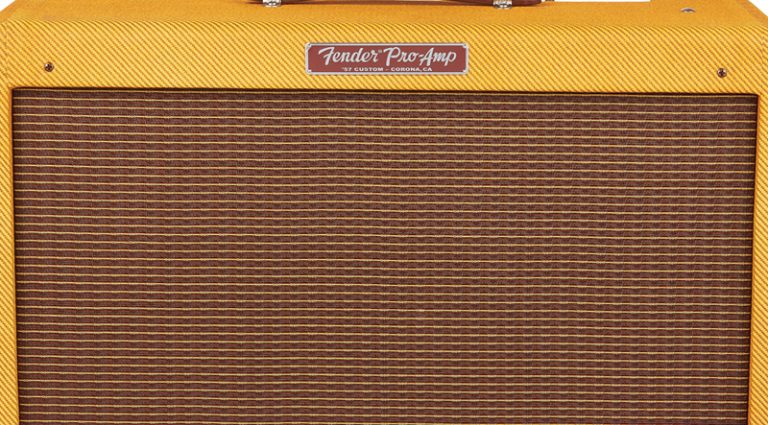 When most guitarists consider Fender’s famed vintage tweeds, the first that come to mind are the 5E3 Deluxe and 4×10 Bassman. The 1×15 Pro-Amp? Not so much. It’s perhaps the least well-known of the line.

That’s good news for Pro-Amp fans, who have long loved the amp’s distinct voice. It’s got the guts and tone of a Deluxe with the wide-open headroom of a 15-incher. And it’s got near the volume of the Bassman without the back-jarring weight and wallet-emptying price tag.

Fender has never reissued the Pro-Amp – until now. And the ’57 Classic Pro-Amp is drop-dead wonderful.

Fender introduced the Professional in 1946 at twice the price and twice the power of their 1×10 Deluxe. The design was revised and revisited several times until the narrow-panel 5E5 Pro arrived in ’55, updated with Bass, Treble, and Presence controls in ’56, and a revised tube array in ’58.

Now Fender’s launching its Custom Shop-built ’57 Custom series, including not just the Pro-Amp, but a 1×8 Champ, 5E3 Deluxe, and the so-called “low-powered” 2×12 Twin.

Yes, it’s all hand-wired – and using custom-made Fender Pure Vintage yellow capacitors and Schumacher transformers to get as close as possible to that original sound.

The chicken-heads on the top-mounted panel include Mic and Instrument Volume and Bass, Treble, and Presence controls. A rubber-protected Standby switch is a welcome update.

The Pro-Amp sings proudly through a single 15″/8-ohm Eminence Special Design speaker, which requires that finger-jointed pine cabinet that’s smaller than a Bassman but large enough to show you mean business. The tweed covering is lacquered for a warm vintage look.

The Pro Amp’s original Mic circuit was designed with a microphone in mind but plugging a guitar into it yields a different and slightly darker tone that stays cleaner as the amp is turned up. The Instrument circuitry’s where good things happen.

The magic lies in that 15, which breaks up differently than a 10 or 12 and will make you a true believer. As noted, there’s so much more headroom to the sound, and the speaker seems to e-nun-ci-ate the details of your playing and the sonic attributes of your pickups and the music more so than a Deluxe or Bassman. It sounds simply full-bore compared to its little brother 5E3.

The harder you play the Pro-Amp, the more it responds. Its tones are harmonically rich, ideal for recreating vintage guitar sounds, but with the power and breadth to handle modern stompboxes and pedalboards.

As you play the Pro-Amp, you get a sense of musical déjà vu, as if history is sneaking up and tapping you on the shoulder. Then you realize this is the amplified tone from many a classic blues and R&B record. B. B. King used one, as did myriad early country pickers and rock-and-rollers. The unsung Pro-Amp was the special sauce that made many of those songs sing.

In considering a new amp, you might pass by the Pro-Amp, but you owe it to yourself give it an airing. It just might be the most underrated Fender amp.