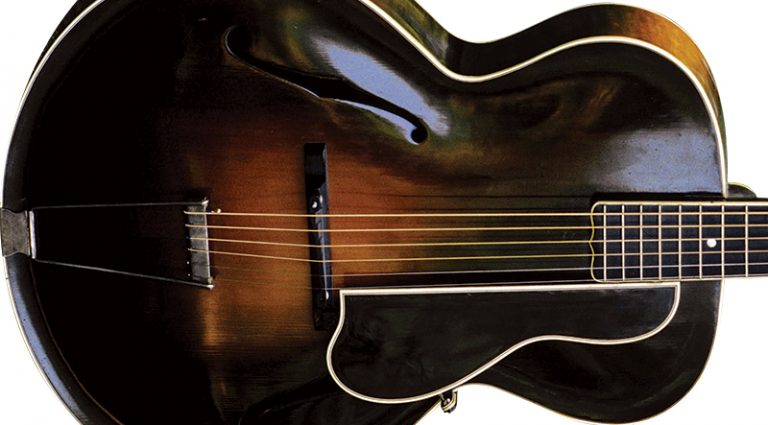 While the Gibson L-5 and F-5 are today recognized as visionary stringed-instrument designs, when introduced as part of the Master Model line in 1922, they incurred vastly increased production costs and lacked a viable market, thus creating an enormous fiscal drag on the company.

Most historians associate Gibson’s creation of the Master Model instruments with Lloyd A. Loar (1886-1943), perhaps the first acoustical engineer to work at a musical-instrument manufacturing company. During his tenure (June ’19 to December ’24) Loar was indeed a catalyst for the Master Model concept, designing innovations that changed stringed instruments. However, it was the influence, vision, and support of general manager Lewis A. Williams (1878-1951) that brought Loar’s designs to fruition.

Beginning in 1902, Williams led Gibson through the innovative marketing of Orville Gibson’s mandolin design, with shallower bodies made possible through violin-like carved tops and backs. These were easier to hold, had a radical new look, and produced more volume, projection, and better tone than their bowl-back predecessors. The mandolin was also relatively easy to learn, and because it’s tuned the same as a violin, a ready supply of classical and popular sheet music could be used without rearrangement or transposition.

During the first two decades of the 20th century, the popularity of the mandolin soared and Gibson sales increased proportionally. Gibson promoted the creation of mandolin “orchestras” with the addition of familial instruments like the mandola, mando-cello, and mando-bass to reproduce the viola, cello, and bass viol parts of a regular orchestra. As the result of these factors and with aggressive inspired marketing, Williams and Gibson dominated the mandolin market in its bullish period.

But the boom did not last.

By the end of the second decade of the 20th century, the American psyche would undergo tremendous change. U.S. participation in World War I began in 1917 and produced casualties on a scale previously unimaginable. Soldiers returned with bodies and minds maimed in ways unlike anything in history. And while the war raged in Europe, the influenza pandemic of 1918 killed more than half a million Americans at home (along with three percent of the population worldwide), making it the deadliest recorded natural disaster in human history.

By 1920, the genteel Edwardian era that had embraced the mandolin was a thing of the past and the coming decade would bring a harder, faster society, one in which life was lived in the moment. It was to be the age of Dixieland and Jazz music, a time in which the mandolin would play a radically diminished role.

The sharp decline in mandolin interest can be graphically demonstrated by looking at Gibson production. Exact figures do not exist, but can be estimated based on reconstructed serial number lists. In the final year of the war (1919), Gibson manufactured about 7,000 mandolin-family instruments. In 1920, production dropped to around 6,000; by ’21, only 3,800 instruments shipped, and in ’25 the count dropped below 2,000. The mandolin would never again be produced by Gibson in large numbers.

But Williams didn’t get the message. Or even worse, he deliberately ignored the obvious signs and instead hired his friend Lloyd Loar in June of 1919 to help Gibson produce a line of newer, better instruments based on Loar’s ideas about tap-tuning and air-chamber resonances.

They began with the mandolin and, after three years of development, produced a truly superior instrument with parallel bracing, tuned top and back, and f-shaped sound holes instead of a single oval. The first Master Model F-5 probably reached the shipping department mid-year and appeared on the Gibson dealer price list in August.

Unlike other Gibson instruments, the Master Models had a Loar signature label stating that “the top, back, tone-bars and air-chamber of this instrument were tested, tuned and the assembled instrument tried and approved.” Loar dated labels and signed his name as the “Acoustic Engineer.” It would be tempting to think he personally approved each Master Model, but this seems unlikely.

Loar’s research and design work alone were not enough to justify his salary, so he also was required to serve as credit manager, production manager, purchasing officer, and supervisor of the repair department. Each July and August, he toured as a concert performer. During this time, he also received a master’s degree in music. So, he could not possibly have had time to personally test every Master Model.

If the F-5 had been introduced before 1917, there’s little doubt it would have been a triumph, but by ’22 there was simply no viable market for it, especially when factoring cost of development. At an initial list price of $200 ($250 in ’23), they were far too expensive for entry-level/amateur musicians, leaving a small number of professional classical players as a possible niche. After the initial orders were filled in ’22, Gibson had a difficult time selling them. Eventually, it resorted to placing instruments with teacher-agents on a trial basis, hoping they or their students would be impressed. This strategy had little success and many were returned to the factory.

Between 1922 and ’24, an estimated 250 Loar-signed Master Model F-5 mandos were made. The last didn’t clear inventory until ’26; their lackluster reception and public disinterest may be gleaned from an ad placed in the October ’31 issue of The Crescendo magazine, which offered, “Gibson F-5 artist mandolin and square case, cannot be told from new, cost new with case $288, sell for $110.” Even promoting the 62 percent discount, the ad appeared for many months.

Like the F-5, the Master Model L-5 guitar had a carved and tuned top, f holes like a violin, and parallel top bracing. It also had 14 frets clear of the body. It has often been said that Martin was the first to bring the 14-fret neck to production guitars, at the behest of banjoist Perry Bechtel. However, Gibson produced the L-5 with 14 frets clear of the body from 1922 onward (including the four earliest examples in shipping ledgers). Beyond that, the Gibson style O guitar had 15 frets clear of the body even earlier. There’s little doubt that Bechtel saw an L-5 and simply made a suggestion to Martin.

One indicator of success for any high-quality instrument is the time required before the manufacturer releases a less-expensive version. In the case of the L-5, it took seven years for Gibson to create the L-10 (released in November of ’31) as a more-accessible f-hole archtop. It’s tempting to say the L-10 ($175 without the case) and others that followed in ’32 – the L-12 (priced at $200) and L-50 ($50) – were a response to increasing popularity of the L-5 or even an attempt to bring lesser-priced product to market in a failing economy. However, it’s far more likely they were a response to the threat of competition. In June of ’31, Epiphone brought nine new archtops to market, the largest being 163/8” wide – bigger than the L-5. Gibson countered with three models in late ’31/early ’32 and then, to be certain they had control of the market, in ’34 they “advanced” the 16″ archtops by making them an inch wider. By ’34, Gibson had built more than 100 L-10s, about 60 L-12s, and more than 300 L-5s, trampling the previous 10 years of its f-hole archtop production in a fraction of the time.

The change in attitude may well be attributable to the rise in popularity of Salvatore Massaro, known professionally as Eddie Lang, whose compositions are still widely studied today as prototype jazz on the guitar. As early as 1927, he was recording jazz solos with Bix Beiderbecke and by ’29 in the Paul Whiteman Orchestra with singer Bing Crosby. He made audio recordings with jazz violinist Joe Venuti, blues man Lonnie Johnson, and fellow jazz guitarist Carl Kress that were very popular at the time. Later, Django Reinhardt and Les Paul were strongly influenced by him.

At first, Lang played a short-necked Gibson L-4, but in the mid/late ’20s switched to the L-5, raising the profile of the instrument through his records, radio, movies, and personal appearances. Lang performed on at least two L-5s before his untimely death in 1933 following a tonsillectomy. No matter how brief his career, his choice of the L-5 influenced many musicians.

While the popularity of archtops steadily increased in the ’30s, the same could not be said for the mandolin. Gibson produced fewer and fewer in the ’30s, and F-5 production ceased altogether during World War II. In the late ’40s and early ’50s, a limited number were produced, including a substantially modified F-5 that superficially resembled the first Master Models but was not highly regarded. It remained for country musician Bill Monroe to bring the pre-war Master Model F-5 mando to prominence in the mid/late ’40s.

Early in his career, Monroe played an F-7. Circa 1940, he was performing in Miami when he spotted a ’23 F-5 in a barber shop and purchased it for $125. While he did not know he was purchasing a Loar-signed instrument, he did notice its volume allowed him to take solos that could be heard in a group with five-string banjo. Plus, its longer neck allowed him to create a closed-chord “chop-style” rhythm similar to the comping technique used by jazz guitarists on the L-5 in orchestral situations.

The instrument changed Monroe’s playing style; had he found an F-5 from the later ’30s or ’40s, his style would not have evolved as it did because F-5s from the later period lack what would come to be known as the “bluegrass bark.” As the popularity of Monroe’s bluegrass music increased in the ’60s, so did the demand for Loar-signed F-5s.

There were other Master Model instruments that did not find commercial success. The H-5 mandola, K-5 mando-cello, and TL tenor lute guitar were all created at the same time but never found a niche and have since been relegated to obscurity. Loar also worked on the development of a banjo, but most of his ideas eventually proved to be impractical. The name “Mastertone” was first applied to Gibson banjos during this time, perhaps linked to employees’ respect for “Master” Loar.

Neither of the men responsible for creating the Master Models lived to see the full success of their ideas. Following months of poor financial performance, Williams tendered his resignation in October of 1923, and died in Los Angeles in 1951, following a string of failed business attempts. Late in ’23, new manager Harry Ferris began to correct finances at Gibson, and Loar struggled to find a place in the new regime. In December of ’24, he accepted a teaching position at Northwestern University and left Gibson. Loar briefly partnered with Williams in November of ’33 to create Vivi-Tone instrument manufacturing, but it was not a success. Loar died in Chicago in 1943.

Because of Eddie Lang and Bill Monroe, the L-5 and F-5 Master Models would find larger audiences and wider acceptance in the last half of the 20th century. Today, both remain in production and have seen development of many derivatives. More importantly, both continue to occupy roles in popular music.

The F-5 and L-5 Master Models were created too late to be part of the mandolin orchestra and too early for the role they’d play in forming jazz and bluegrass music. For Williams, Loar, and the Gibson workforce, vindication was delayed for years, but their influence changed music.