If ever there was an amp to make a fan of tweeds go wobbly in the knees, this is it. There’s just something about the 3×10″ 5E7 Bandmaster that drives vintage-Fender nuts gaga. And if you’re prepared to altogether collapse in a gelatinous heap, consider that the VG reader who owns this one also owns its successor, the 5G7 “middle-volume” pinkish-brown-Tolex Bandmaster – possibly the rarest of all production Fenders. But that’s a different tale.

The Bandmaster arrived mid ’53 in a short-lived 1×15″ incarnation of Fender’s wide-panel tweed cab. In ’55, it took up the 3×10/narrow-panel configuration that then evolved to the more-desirable iterations of 1959. The 3×10″ 5E7 Bandmaster, 2×10″ 5F4 Super, and 1×15″ 5E5-A Pro were all essentially the same amp, other than speaker complement, output transformer, and occasional minor tweak in components (similar was the 2×12″ 5E8-A “low-powered” Twin of ’55-’58). Some had minor differences like values for negative-feedback resistors to fine-tune headroom or match the NFB loop to the output impedance for optimum speaker damping. 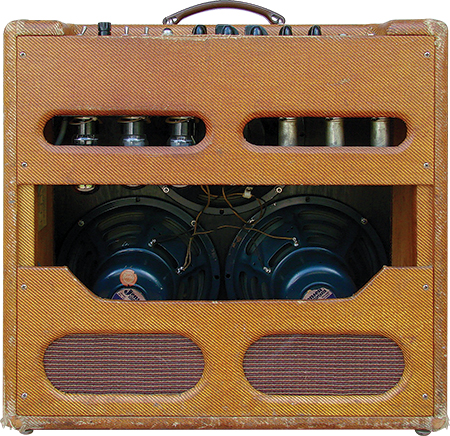 In any case, why the bods at Fender saw need to replicate the chassis in so many slightly-varied guises is baffling… but we’re glad they did. That trio of Jensen P10R Alnico speakers is somehow beguiling; the amp pumps more air than the (admittedly awesome) Super, yet it’s still delightfully light and portable. Commentators have called the 5E7 Bandmaster “a Bassman with three 10s instead of four,” and there are bound to be similarities – given they are both dual-6L6 tweed Fender amps of the same era – but the Bandmaster is different in respects aside from speakers. Before detailing some of those, owner Tommie James offered comparative commentary.

“Having owned a ’59 and a couple of ’60 5F6-A tweed Bassman amps, to my ear, this has many of the same tone qualities,” said James. “With 26 to 30 watts versus 40 watts in the Bassman, though, it’s not as loud and breaks up sooner, with a sweet, singing tone unlike any other amp I’ve owned. This one still has the original transformers and original Jensen P10R speakers, which are the perfect choice for this circuit.”

As for the dissimilarities, there are four particularly notable ways in which the 5E7 Bandmaster and its mid-sized brethren (Pro, Super, low-powered Twin) departed from the mighty Bassman: 1) they were given output transformers that were smaller and thus produced less power, yielded a softer low-end response, and helped the amps to quicker breakup; 2) they used the older-style cathodyne (a.k.a. split-load or concertina) phase inverter, which is prone to distorting more easily on its own than the long-tailed-pair in the Bassman and high-powered Twin; 3) they lacked the Middle control found on the Bassman and high-powered Twin, so their cathode-follower tone stacks behaved a little differently; and 4) they had lower DC voltage to the output stage – in the range of 410 for the Bandmaster versus 430 for the 5F6-A Bassman.

Add them up, and these changes make for a smaller sound and less overall volume with easier distortion when pushed. For many players, those are great characteristics; the Bandmaster doesn’t need the Bassman’s ear-splitting volume levels to roar but still sounds thick, juicy, and mean when it gets there.

“Before I acquired it many years ago, the amp was played a lot, and except for the tubes, its electronics were 100 percent original,” James added. “The only change was a replaced two-prong plug on the end of the original cord.”

James sent the amp for a once-over by Mike Clark, a notable maker of reproduction tweeds, who did nothing to disturb its sound and feel, but did remove the cardboard covers from the original Astron Minimite electrolytic capacitors and slip them over new filter caps, then sealed their ends with silicone.

Another fascinating aspect – and a myth that it might help dispel – is found around back of the chassis, in its output transformer. Having mentioned how the Bandmaster, Super, Pro, and low-powered Twin differed primarily in their OTs, well, in this case… they didn’t. Tweed aficionados have long assumed Bandmasters were built with OTs with a secondary impedance of 2.67 ohms to match the load of three 8-ohm speakers wired in parallel. Similarly, the Super and Twin had a 4-ohm OT, the Pro an 8-ohm, and the Bassman a 2-ohm. Examining this one closely while photographing it for this feature, James found the number 1848 etched so faintly he had missed it before – the same part number as that of the OT used on the 5F4 Super. Ipso facto, this Bandmaster has a 4-ohm output transformer.

Curious to know whether it was an anomaly, James contacted Nic Grabien, a tweed aficionado and font of knowledge in the details of vintage Fender amps, in general. According to Grabien, Fender never used a 2.67-ohm OT in the Bandmaster.

“Leo used four ohms as ‘close enough’,” Grabien said. “Which, considering a speaker’s impedance varies with frequency and the 2.67-ohm figure would be the minimum impedance at about 125 hertz, it’s indeed close enough. Depending on the frequency of the note, the impedance could be as high as 22 ohms. So, a 4-ohm transformer is a perfectly acceptable design target for a three-by-8-ohm output stage.”

Any reader with authoritative information that says otherwise, please let us know. We tried to tell James that if the slight impedance mismatch bothered him, he’d be welcome to leave the amp with us for long-term study. Apparently, he is still considering the offer.