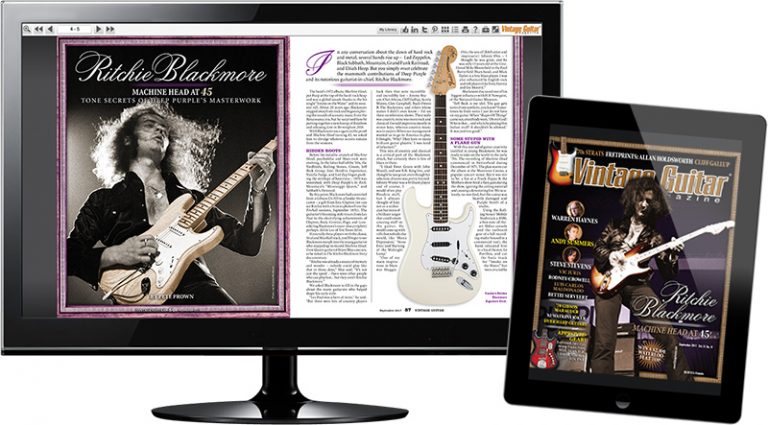 Find what’s in this issue or learn the 3 ways to get your Vintage Guitar fix!

We sit with Ritchie Blackmore, who helps us mark 45 years since the release of Machine Head by revealing the final lost secrets behind his work on the monumental Deep Purple album. We also offer great conversations with Warren Haynes, Andy Summers, Steve Stevens, Rodney Crowell, and NYC jazz legend Vic Juris, as well as Train’s Luis Carlos Maldonado and Dutch grungers Bettie Serveert.

Plus, we study the life of Cliff Gallup as he elevated the Gretsch Duo-Jet and career of singer Gene Vincent! Then, we dig into Fender’s travails with the Stratocaster in the early ’70s, explain why the Watkins Joker is the funkiest amp you’ve (n)ever seen, and examine the origins of the Gibson Marauder. All this, along with our “VG Approved Gear” reviews, “Hit List” music reviews, and much more!

›A Bill Lawrence Original
The Gibson Marauder
Les Paul purists often cast a cocked eye to some of Gibson’s creations from the ’70s. Many were interesting, others whimsical. But a few, like this one, turned out to be excellent instruments. | By Michael Wright

›Beat-Gen Beaut
The Watkins Joker
In early-’60s Britain, any well-heeled young guitarist or singer would’ve loved an amp/PA with reverb, tremolo, mic stand, and tape echo all in one. Put your hands together for the Watkins Joker, funkiest rock machine you’ve ever seen. | By Dave Hunter

›Leap Forward, Step Back
The Strat in Transition
Leo Fender knew the survival of his company hinged on besting the Telecaster. And from the moment it was introduced in ’54, his design hit the mark with its body carves, new pickups, and cutting-edge vibrato. | By George Gruhn and Staff

›Cliff Gallup
Crazy Fingers
At Owen Bradley Film & Recording Studios, wannabe stars cut vocal tracks with professional help from the studio’s crack team of session players. But when Cliff Gallup rolled in to back Gene Vincent, it was the A-listers who stepped aside. | By Michael Dregni

›Ritchie Blackmore
Machine Head at 45: Tone Secrets of Deep Purple’s Masterwork
We revisit the amazing guitar tones of the global smash album that put Purp at the top of the hard-rock heap and introduced us to the accidental classic “Smoke on the Water,” with its monster riff created by the band’s notorious guitarist-in-chief. | By Pete Prown

›Andy Summers
Creating Light From Dark
Fans know to expect surprises when this hero offers new music, and that holds true with his latest solo effort, Triboluminescence. Its title is a metaphor for any creative act, and its contents shows how one of the most influential guitarists in modern pop is still trying new approaches. | By Greg Prato

The (Way) Back Beat
Guitars to Dyer For | By Peter S. Kohman

Shop of Hard Knocks
Pins and Polish | By Will Kelly

Gearin’ Up!
The latest cool new stuff! To be included in Gearing’ Up, contact us at vguitar@vintageguitar.com.