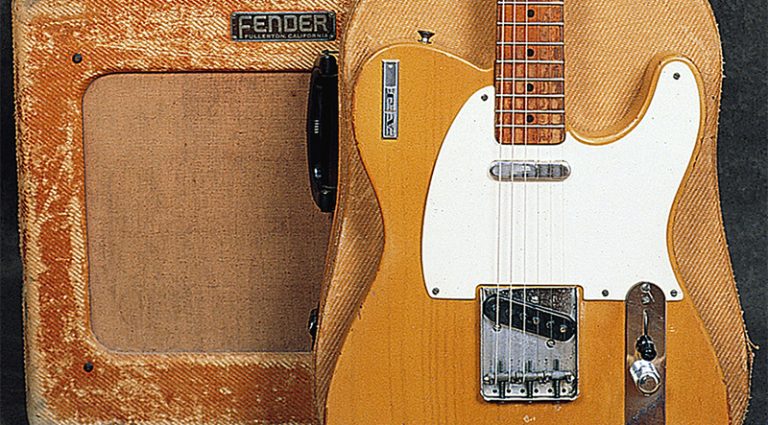 In 1950, A.J. Custer took his triple-neck steel to Denman Music in Brownwood, Texas.

He was trading it on a new electric guitar – a Fender Broadcaster – with an amplifier and case. The total cost was around $300, which A.J. paid off in $10 payments over three years. He owned (and played) this guitar for over 50 years.

A.J. displays pictures from the early ’50s with the guitar and its white pickguard. Many have film processing dates stamped on the back, and one shows a young man and his new Broadcaster, posing with a friend. Another shows him and his guitar on a Navy destroyer during the Korean conflict.

A.J. had that kind of love for his guitar. In fact, he played it so much (and cleaned it so little) that until a recent refurb, its body and neck were dirty, worn, and beaten. In addition to a corroded tuning key, the Broadcaster had a broken volume pot, so it didn’t make a sound when plugged into the Fender Deluxe amp A.J. bought with it. But the guitar is light and resonant. Anyone who plays it feels the history evident in its V-shaped neck. And though he never was a regularly gigging guitarist, the mileage begs the question, “Where did you play?”

Gazing at his old pictures, he reflects. “If I would have known the guitar was going to last this long, I would’ve taken better care of it!”

But the lack of regular cleaning was a mixed blessing. True, the tuning keys, fretboard, and body suffered. But it’s also most likely responsible for the preservation of the guitar’s perfect headstock decal. 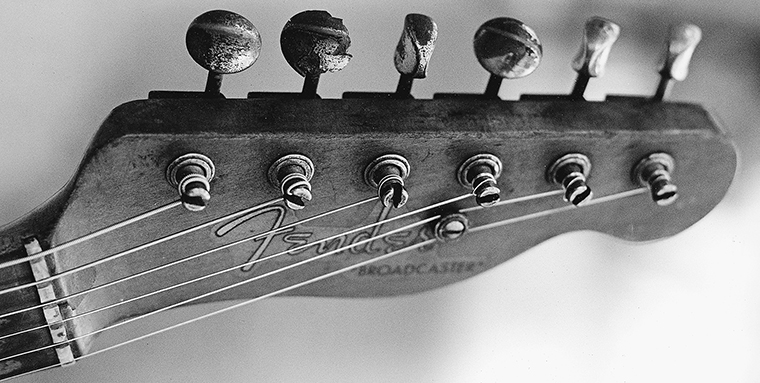 Fender’s Broadcaster was the first production-model solidbody electric guitar, introduced by Leo Fender in 1950. Soon after its release, Gretsch informed Fender that it had registered the trademark name “Broadkaster” for a drum set, so Fender clipped its logo decals and began producing guitars with only the Fender name on the headstock. Experts estimate that 200 guitars were made with the Broadcaster logo from October of 1950 to February of ’51. Guitars manufactured without a model name are now commonly referred to as “Nocasters.”

The vasy majority of Broadcasters, “Nocasters,” and early Telecasters had a single-ply, black Bakelite pickguard with five mounting holes. But A.J.’s guitar has one seldom-scene feature – a white single-ply pickguard.

“Everybody tells me it’s supposed to be black,” A.J. said. “All I know is that it was like that when I bought it, and I bought it new. I can’t make one like that, and I don’t know where I would have got one otherwise.”

The most probable explanation is that the white ’guard is original, from Fender’s shop in California. After all, in early 1950, Fender produced pine-bodied Esquires that used a white pickguard. It’s unlikely Leo would have wasted any parts from that run of guitars. Also, the first Broadcaster (serial #0001), which Leo Fender gave to Jimmy Bryant, had a white pickguard. So it makes sense that an early Broadcaster could have been fitted with a white ’guard.

Under close examination, the pickguard on A.J.’s Broadcaster appears to be made of Bakelite, which is harder and more brittle than the plastic ’guards that appeared on the Telecaster beginning in ’54. Its edges show the fibrous, layered composition, and its surface is pocked with small dimples. The top is coated with lacquer, like the black Bakelite ’guards of the era.

Adding to the mystique of the guitar, during restoration by its new owner, a few prototypical elements of the neck construction were discovered. First, the fretboard has a radius of 9.5″ rather than the typical early Fender radius of 7.25″. When the nut was replaced (A.J. had long fashioned a replacement, so the original was gone), the luthier discovered that the truss rod plug extended into the nut bed, and the bottom of the nut had to be cut to allow for the curved top of the plug.

Finally, the truss rod route on the back of the neck was fairly rough and required large areas of wood filler and patches in the maple, suggesting the truss rod was added after the neck was at least roughly shaped. This could have been one of the first guitars fitted with a truss rod; likely a prototype (or assembled with prototype parts) and later sold as a production model.

After giving the guided tour of the Broadcaster, A.J. brought out an old mahogany-bodied Martin to pick a few songs and talked a little about trying to play early Elvis songs.

“When I was learning to play, I left that thing on there,” he said, pointing to the “ashtray” bridge cover. “But I found out I couldn’t play that Scotty Moore stuff.”

He then accompanied himself on the Roger Miller version of “Me and Bobby McGee.” His big hands grasped the neck as he played in his country/rockabilly rhythm style with walking bass lines. Like Johnny Cash, his strum pattern took his pick across the higher frets rather than over the soundhole. He played a little bit of “That’s Alright, Mama” by Elvis. His voice was strong and mature, a nice complement to his guitar style.

The current owner of Broadcaster #0032 has restored the guitar. The corroded tuning key button was replaced with a period-correct Kluson, and the volume pot was repaired rather than replaced. A thorough setup and a minor fret dress once again made the guitar a fantastic player.

And it will always be a piece of history that represents the genesis of Leo Fender’s contribution to the evolution of popular music.

An Enigma Goes Under the Microscope

When I first saw the ad for the “Fender Broadcaster guitar with case and amp” in an online ad, I hoped I’d get the chance to get a look at it (even though I couldn’t afford it). I’m glad I did. With A.J.’s permission, I stood at his kitchen table disassembling his well-worn guitar (with trembling hands). Joyce, his wife of 51 years, and his son, Jack, were there.

All of the manufacturing details unique to an early Broadcaster were evident with A.J.’s guitar: 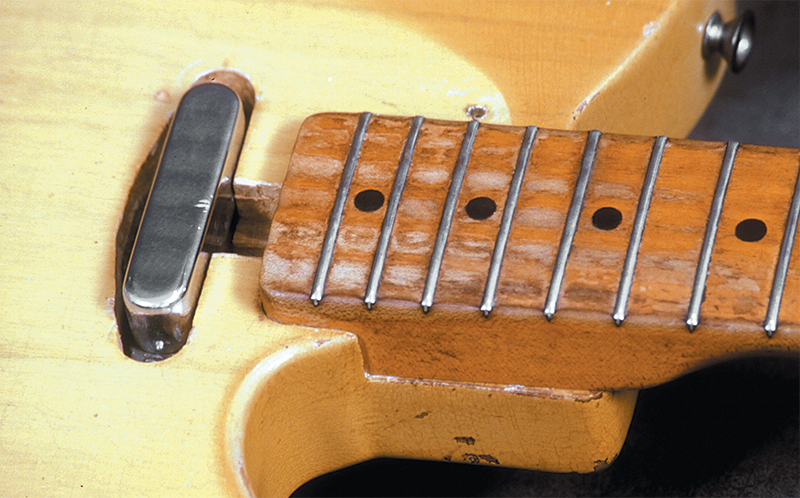 • No wiring channel route under the pickguard (started in 1951 to aid in assembly), tin baseplate on bridge pickup (changed to copper in early 1951).
• Hand-chiseled access to the truss rod on the body. Earliest Fender guitars didn’t have a truss rod, so bodies didn’t have access; the channel was hand-chiseled after the body was manufactured. The first Fender guitars (prototypes and trade show models) used necks that didn’t have a truss rod, so the bodies didn’t allow for truss rod access. After getting feedback from sales reps about necks starting to bow, Leo Fender reinforced his necks with a truss rod. Fender factory records show that the truss rod tooling die was purchased on October 3, 1950. This very early Broadcaster shows evidence of the hand-chiseled truss rod access added after the original manufacturing of the body. 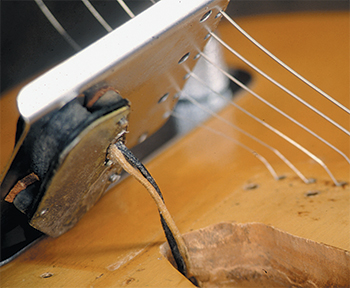 • Only Broadcasters are known to have a tin plate on the base of the lead pickup. Most “Nocasters” had a copper base, though there are exceptions (as is the case with many details of early Fender production). Guitars as late as 1952 can be found with tin baseplates.
• Slot-head adjustment on truss rod (changed to Phillips in the summer of ’51). Although there are exceptions, most early Telecasters (starting in the summer of ’51) used the Phillips-head, as do some late “Nocasters” from August of ’51.
• Shaped “thermometer” case (see top photo) covered in tweed (changed to alligator/brown tolex later in 1950, then changed to one side-shaped case known as poodle case in early ’53, then changed to rectangular cases from late ’54 onward).

Special thanks to Ignacio Baños, A.D. Barron, and Mike Castoro, Telecaster collectors and historians, for explaining the details, to Paul Green for providing the Telecaster Discussion Page website (tdpri.com), and to John Budz for his help.

This article originally appeared in VG December 2003 issue. All copyrights are by the author and Vintage Guitar magazine. Unauthorized replication or use is strictly prohibited.