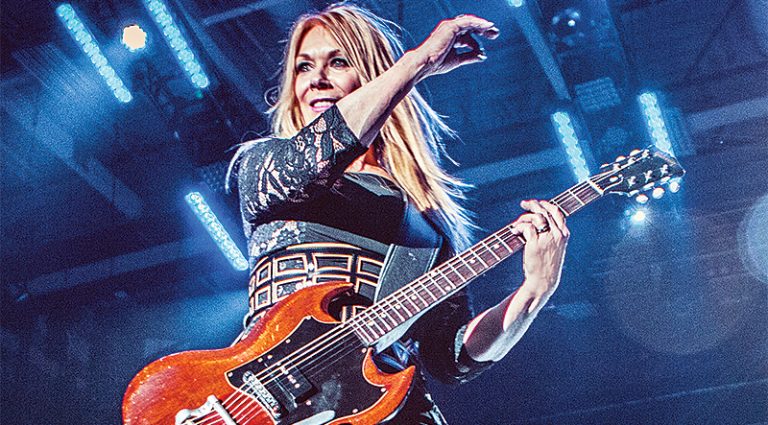 Responsible for guitar-laden classics such as “Crazy On You,” “Love Alive,” and “Devil Delight,” Nancy Wilson has been inspiring musicians for decades. Nancy and her sister, Ann, have churned out one well-crafted Heart record after another, followed by successful tours. This summer, they released a new album, Beautiful Broken and followed with the Rock Hall Three for All tour with fellow Rock and Roll Hall of Fame inductees Cheap Trick and Joan Jett.

“We were approached by Concord Records to come up with a few new songs and re-doing a couple that got lost in translation,” Wilson said of Beautiful Broken. “I love the idea because I always wanted to re-record a couple of the gems that lost their way, particularly from the ’80s (laughs)! It’s really got a cohesive, great sound and feel. It’s very big-rock, but it’s Heart, which constitutes that you also have some very romantic moments; it wouldn’t be Heart without both.”

They tracked the album live.

“The way this band is feeling right now, we had to do it together, at the same time, in the same room. We do the writing first and then get together, usually at sound check, to start learning the stuff. We want to try anything new live before recording it because you get a real feel for it and get it under your belt so it’ll just sound good, rather than learning it in the studio.”

Wilson used a typical-for-her mix of guitars in the studio.

“I pulled out a couple of my really nice acoustics,” she said. “I have a parlor guitar that has a really sweet sound – very chimey – an old Hauser classical that’s amazing, and my Martin signature guitar HD-35. I worked with Martin a few years ago to put that together, and I play that onstage a lot.”

Wilson is also known for her mandolin work.

“In 1973, I bought a Japanese Gibson copy at the Sherman Clay Music Store, in Portland, and I’ve been using it since. I recently purchased an old Gibson, which you can’t beat for recording, but I would never take it onstage.”

Electric guitars included her stalwart ’63 Tele and her ’68 SG, plus, “There was a beautiful Gibson ES-345 B.B. King I got to borrow for one song. A friend of our bass player brought it in and I was like, ‘Oh, my god, this is the perfect guitar for this song!’ I also have my ’61 Les Paul Junior and a ’58 Special that I didn’t want to keep bringing out on the road. I use them in the studio sometimes. Live, I always use the Nighthawk Fanatic I designed with Gibson.”

She’s also recently been playing a Deusenberg that once belonged to Elvis Costello. “My guitar tech, Jeff Ousley, was doing a tour with him and at the end, Elvis just gave the guitar to him. I’m lucky enough to be playing it. It’s an incredible guitar.”

Wilson typically uses the same amp rig live and in the studio.

“I’m really happy with the way we’re rolling. We’ve got it dialed for a great rock sound using a Budda HD30 and a Fender Tonemaster with two Orange 4×12 cabs with 30-watt Celestions. I also used a Fender Deluxe on the record.”

“I have a couple of Trace Elliot TA200 acoustic amps that I use on stage. When playing acoustic, I want to have it in the air. If you have one of your in-ears pulled out a bit, you’re going to hear it in the air and on the stage.”

Asked to describe her style, Wilson says a major element is the strings. “With electric, I play with heavy strings. I’m not bending like a lead player; I bend like a rhythm player, inside rhythms, so I think it makes a better sound with heavier strings. It gives more resistance so I can play electric kind of the same way I play acoustic, which is rather aggressively (laughs)! I play mediums on acoustic because I like to get more of the rich tonality from the strings. I go for dissonance; I go for open rock chords. I do step out on lead a few times live, but it’s not my passion to be a lead player. I think inside the songwriting, rhythm and singing of the song.”