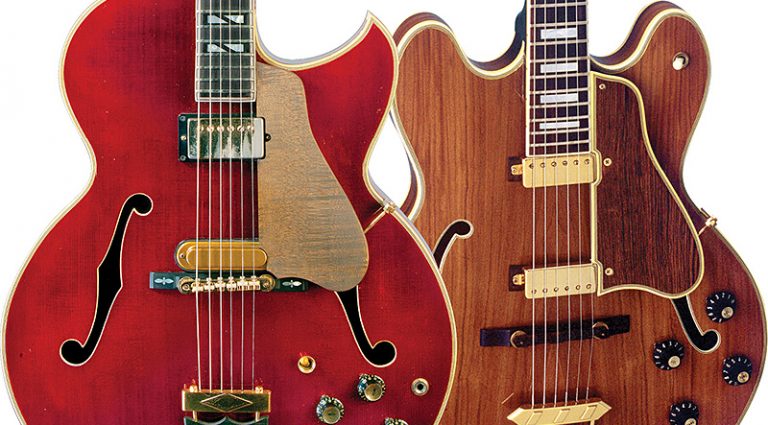 Gibson has produced two guitars bearing the “Crest” name. While both designs date to the 1960s, they’re very different instruments.

The first incarnation was a single-cutaway with design ties to the L-5CT, while the second looked more like a fancy ES-335 with a shortened neck.

In almost every way – size, construction materials, appointments, and finish – these two guitars are 180 degrees apart.

The first Crest was the brainchild of guitarist Andy Nelson, a salesman/clinician who toured the country for Gibson from 1955 to ’65. Nelson’s connection with Gibson likely began in the late ’30s, when he purchased an L-4 for his mother to replace a guitar she’d owned and he destroyed as a child!

As an employee, Nelson gained disfavor with the Gibson bureaucracy because of his tendency to return to the factory after a sales trip laden with custom orders and new “ideas.” It’s interesting to note that the large-scale production environment at Gibson made custom orders problematic. A 1940 letter from customer service rep Julius Bellson to a potential customer explained that the factory had “discontinued the practice of making any special instruments other than those listed in our catalog.” Bellson then goes on to explain in some detail how custom instruments were a money-losing proposition. But the evidence of other custom instruments constructed after the date of the letter show that in practice, this embargo was easier to impose than sustain, and Gibson continued to produce a small number of one-off instruments, many, likely, at the urging of Nelson.

Very few first-version Crest models were produced – perhaps as few as three, but probably no more than six. Because Nelson was such an advocate of custom orders, their specs may have varied, but the best-known example had a thinline single-cut/Florentine body that resembled the L-5CT. The instrument had a carved spruce top with maple back and sides, its body was top-bound in multiple plies of white/black and a triple-bound back. The elevated pickguard was unusual in that it was constructed of alternating dark and light plies of maple. The finish is Cherry Red like the 335 of the period, and both sound holes are single-white bound. The guitar has two pickups – a full-size humbucker in the neck position and a single-coil at the bridge. Each has Volume and Tone controls with a selector toggle on the lower treble bout, along with a Switchmaster tone control. The input jack is located on top of the guitar rather than the side. The guitar is wired for stereo output, and its two-footed rosewood bridge is removable and has a Tune-O-Matic top as well as decorative mother-of-pearl inlays. The trapeze-style tailpiece has a raised diamond on the cross-bar and a metal centerpiece that displays a “coat of arms” motif.

The neck has the larger open-book peghead of the type seen on L-5 models of the period and an intricate MOP inlay depicting a coat of arms with three Moorish crescents on the shield. The tuners are nickel-plated Grover Imperials. The ebony fingerboard is top-bound in multiple plies of white/black and triple-bound on the side. The fingerboard inlay pattern is the split block borrowed from the Super 400. The truss-rod cover is a trapezoidal art-deco design in white and black, engraved with the word “Stereo.”

It’s difficult to be precise more than 50 years after the fact, but Gibson records indicate the first Crest was built in December of ’59, the last in August of ’61. In ’62, Nelson was moved to the Epiphone lines, and it appears no more of the original Crests were made.

In ’69, Gibson revived the name with a guitar that bears little resemblance to Nelson’s creation. A double-cut thinline similar in appearance to an ES-355 but constructed from figured Brazilian rosewood veneer, it had no solid block in the body, leaving it fully hollow like the ES-330. The body also had a center back strip of decorative wood marquetry and was top-bound with multiple plies of white/black and the back is triple-bound. The elevated pickguard was matching Brazilian rosewood veneer bound in multiple plies of white/black like the body. The guitar had two f-shaped sound holes, each triple-bound.

The electronics included two “floating” mini-humbucking pickups with individual Volume and Tone controls and a pickup selector toggle on the lower treble bout. The pickups were mounted using L-brackets and there were no body routs or cutouts. The bridge was removable with a two-footed rosewood base and a Tune-O-Matic top. The trapeze-style tailpiece had three raised parallelograms on the cross bar and a Brazilian rosewood centerpiece with inlaid MOP trapezoid and etched with “Crest” in script.

The three-piece maple neck was a combination of the familiar and unusual. While the peghead was a standard Gibson “open-book” shape with multi-ply binding and sealed Kluson tuners, the single-bound Brazilian rosewood fingerboard joined the body at the 15th fret (rather than the 19th). This had the unfortunate effect of making the higher frets inaccessible. The inlay pattern was identical to a Les Paul Custom or 335 of the period with rectangular mother-of-pearl blocks in the fingerboard and the five piece split-diamond in the peghead. The truss-rod cover was engraved with the model name in script and the heel had a decorative cap in white/black/white veneer.

The hardware was available in gold-plate (1969-’71) or silver-plate (’69-’72). This distinction gave rise to the colloquialisms “Crest Gold” or “Crest Silver” now generally used when referring to these guitars.

Unfortunately, the second Crest had a number of design flaws that made it difficult to use. Beyond the inaccessible upper frets, the lack of a center block caused it to easily feed back. The removable bridge also tended to move if the guitar was given light-gauge strings, thus making it note incorrectly. The mini-humbuckers were a dubious addition, not favored by many.

To the best of our knowledge, 172 of the second-generation Crest were produced before the model was discontinued in ’72. At a list price of $895, it was expensive, but sold reasonably well. Today, it is valued by collectors for its beauty and relative rarity, but is not a player favorite.

The first Crest is a rare bird, indeed, and both stand as examples of Gibson’s ability to create variations on a theme, a characteristic which has come to define the company.

To learn more about Andy Nelson and his career, visit grinnellfamily.org/images/andybook.pdf.