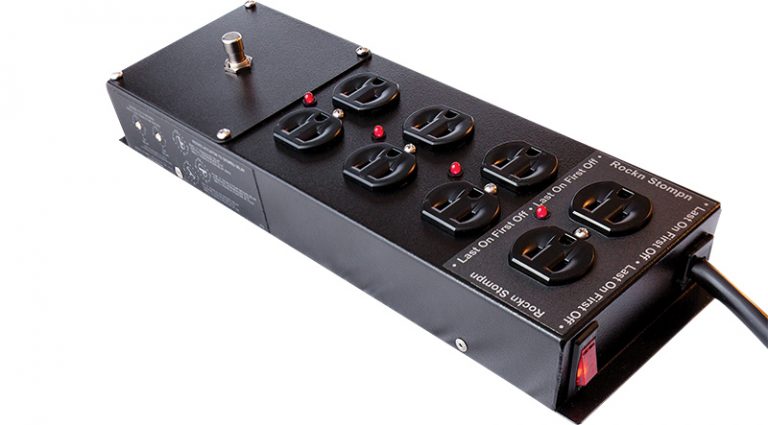 Power. Juice. Electricity. The brilliance of Ben Franklin, James Watt, and Nikola Tesla helped harness, if not tame, this vital energy. Subsequent refinements that are of particular interest to guitarists have come from Heinrich Hertz, who helped in the development of the vacuum tube, as well as from Leo Fender, Seth Lover, and Lloyd Loar. Extensive further experimentation has produced extraordinary accomplishments, from unmanned interplanetary travel to blistering versions of “Beaumont Rag,” “Sultans of Swing,” and “Master Of Puppets.”

Anyone who has honky-tonked through vintage nightclubs knows that the issue of safe electricity can be literally life or death. For musicians who bring thousands of dollars of gear to that hundred-dollar gig, “good” power is essential to safeguarding their investment – if not their lives.

Into this world of questionable electrical power comes the Rockn Stompn Sequential Power Strip, a power conditioner specifically tailored to guitar and other musical gear, affording a consistent voltage level despite fluctuating loads. Crucial protection for surges and excessive current are also provided. The annoying radio signal most tube amp lovers have lived with for ages is repressed along with other electromagnetic interference. The Rockn Stompn Sequential Power Strip is a shielded and protected 15-amp circuit wrapped up in a rugged welded box – in other words, “good” power.

The strip separates itself from the pack with its sequential on/off circuitry. Using a footswitch mounted on a metal plate, the Sequential turns on the amp circuit last, and turns it off first. The remaining electronics power down two plugs at a time, eliminating the possibility of that explosive, cringe-worthy pop! that is potentially damaging to amps, speakers, and human ears. Adjustable timing from 1 to 15 seconds compensates for slower tube power-up times.

At a no-frills quartet gig in a Louisiana venue, we plugged a guitar amp and a powered speaker into the two amp-designated plugs. A small mixer, tuner, preamp, and graphic equalizer were all accommodated by the eight plugs available. After flipping on the power switch and stomping the stomp switch, the lights blinked on in order, then on came the effects, the mixer, and finally the amps, quietly with no pops or extraneous interference. Performance and power-down were equally smooth and quiet.

Is your gear better than your venue? If so, baby it with the Rockn Stompn Sequential Power Strip, which should be on the list of essential gear for any serious gigging guitarist.