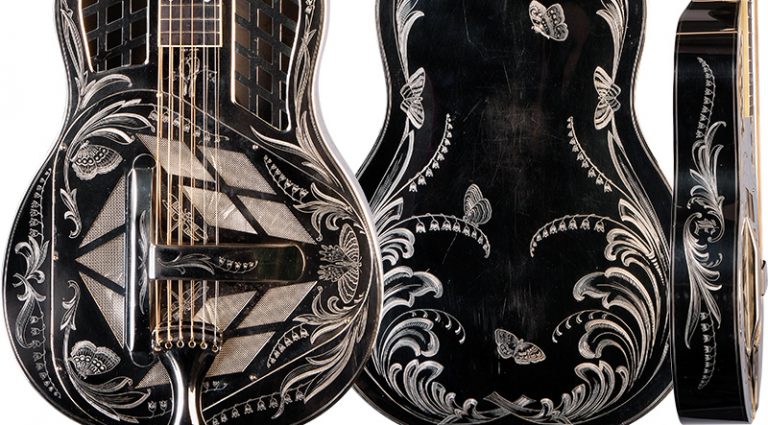 Metal-bodied guitars built by the National String Instrument Company before World War II represent a giant leap in guitar design and technology. When they debuted in 1926, they were startling in both appearance and sound; there was simply nothing else like them.

Throughout the ’20s, the guitar gained popularity with rising prominence of radio artists like Nick Lucas and Eddie Lang. However, most guitars were not loud enough for solo work and were often relegated to rhythm work. In an effort to overcome the lack of volume, two lines of thought gradually emerged regarding amplification through mechanical devices or by electrical means.

The invention of the vacuum tube in 1906 and the first amplifier circuit in 1913 were important steps for the electrical camp, but the progress of the electric guitar was stalled in the early ’20s by the lack of a workable pickup and loudspeaker. Bell Laboratories would demonstrate a working paper-cone speaker in ’25, but the invention of the practical, commercial single-coil pickup was still a few years in the future. This left the field open for men like George Beauchamp and John Dopyera, both proponents of mechanical amplification, and principles of the National String Instrument Company.

Located in Los Angeles, the company was incorporated on January 26, 1928, by Beauchamp, Dopyera, Ted Kleinmeyer, Paul Barth, and Murray Ferguson. The mechanical advance represented by the National guitars was based around three spun-aluminum speaker cones, each driven simultaneously by a multi-armed “spider,” which in turn supported the bridge of the instrument. The assembly was set into the top of the metal body and became known as a “tri-cone” model.

The origin of the idea to use a speaker cone to amplify the sound is unclear. Years later, George Beauchamp and John Dopyera would both claim the invention, though Dopyera’s name alone appears on the 1927 tri-cone patent. Personality differences and professional rivalry would lead Dopyera leaving National then forming a separate company in 1929 with his brother, Rudy. The Dobro Manufacturing Company would go on to build another successful and iconic American guitar based around a single-cone design.

Beginning with a few hand-built prototypes in ’26, the new National guitars quickly made an impressive entrance into the market. With art-deco styling, polished metal bodies, and high-quality decorative engraving, the visual appeal, for performers, was incredible. With orders increasing exponentially, in 1927, National turned to the Rickenbacker Manufacturing Company to create the metal bodies. Adolph Rickenbacker had one of the largest deep-drawing metal presses on the West Coast and could produce 50 bodies per day.

Fueled by the widespread popularity of Hawaiian music and given immediate visibility through musicians like Sol Hoopi, Tampa Red, and Son House, by 1928, the National factory could hardly keep up with orders. Company executives and major stockholders partied with movie stars and went on weekend-long gambling cruises around Catalina Island. The stock market crash of 1929 brought an end to the festivities, but for a short while, life was very good at National.

Metal-bodied pre-war National guitars were constructed such that the parts which form the neck and body are soldered together, making them effectively an integral unit. This made them unlike most other instruments of the time, but not unique. Prior to National’s emergence, another Los-Angeles-based company, Weissenborn, was using an almost identical design to construct acoustic Hawaiian guitars. Weissenborn guitars are today held in high regard for acoustic playing, and have an integrated hollow neck that is open to the body. National used a similar design with hollow metal necks. What Hermann Weissenborn thought about this infringement is unknown. It could be argued that instruments with hollow necks were not a new idea. The original mandolins constructed by Orville Gibson also used hollow necks which were integral to the body.

The guitar featured in this month’s article is a tri-cone Style 3 or De Luxe model, produced early in 1928 and formerly owned by country music legend Little Jimmy Dickens. The Style 3 sold for $165 with a hard case priced at $25 extra. This made the National guitar an expensive choice. By comparison, a Gibson Nick Lucas signature model from ’28 was priced at $125 and a top-of-the line Martin 000-45 was only $170. The Style 3 was produced from 1927 through ’34, but the retail price never changed, remaining steady at $165, seemingly unaffected by the economic disaster of the early ’30s.

This particular example is a square-neck model, with high string action, meant to create Hawaiian music using a steel bar. “Round-neck” models set up for regular playing were also available in all models at the same prices. Unfortunately for today’s collectors, more square-necks were produced than round-neck instruments due to the popularity of Hawaiian music at that time. In today’s market, the rarer round-neck version is more valuable because of its popularity in playing acoustic blues. Because the necks are integral to the body, they cannot be converted from Hawaiian to Spanish styles.

The Style 3 body is constructed from German Silver, a nickel alloy which was used on tri-cone models. The exterior is nickel-plated and features intricate floral engraving; this particular pattern is known as Lilies of the Valley and was designed by Dopyera and his wife. The engraving was done in a building behind the main plant at the National factory. The metal neck has a mahogany peghead and a 19-fret fingerboard (Spanish versions had 12 frets clear of the body). The serial number (390) is die-stamped on the back of neck in what would be the volute or hand-stop. Instruments produced after serial number 380 are considered superior because they have arched backs and an integral metal platform for the cones to sit on. This modification delivers more sound from the cones.

Like many early National instruments, this guitar has a number of custom options and upgrades. The standard engraving pattern has been enhanced with dragonflies, birds, and butterflies. An upper-case letter E is engraved on the treble and bass sides, presumably representing the name of the original owner. The pearl fingerboard inlay we typically see on a Style 3 is a diamond pattern, but this example has simple dots. Similarly, the peghead is similar to what is seen on cheaper (and later) single-cone models with a black painted face and “shield” decal. Most Style 3 guitars had an ebony peghead veneer with an inlaid pearl logo. A few have even been seen with a pearloid veneer and an etched logo. It may be that this particular instrument was returned to the factory for repairs.

In December of 1933, the Dobro Manufacturing Company gained control of National and the two companies merged on July 1, 1935. George Beauchamp had left the board of directors at National and sold his stock as soon as the Dopyera brothers gained control in ’33. Ironically, his focus thereafter was on the development of electrically amplified instruments. In a foresighted move back in ’31, Rickenbacker and Beauchamp formed the Ro-Pat-In Corporation (later Electro-String) to manufacture aluminum-bodied electric lap steel guitars. The “horseshoe” pickup used in these instruments was designed by Beauchamp and is considered one of the first commercially viable units because it eliminated a majority of feedback problems. These Electro-String (Rickenbacker) lap-steel guitars have come to be known as “frying pans” given their resemblance. The strings on the “frying pan” passed through two large horseshoe-shaped magnets and over a wound coil. While it worked well enough on a lap steel, the size, weight, and appearance did not lend themselves well to installation in the acoustic guitars of the time. Yet, successful enough for Beauchamp to claim revenge on the Dopyera brothers.

While the deteriorating economic climate of the early ’30s contributed to shrinking sales of all resonator guitars, other developments spelled the end of the era. By the mid ’30s, Gibson was offering viable electric instruments. Gibson’s larger production capacity and efficient marketing department created an untenable situation for the much smaller National-Dobro and Electro-String (Rickenbacker) companies. Rickenbacker lost market share because its products were not as versatile as Gibson’s acoustic/electrics. Band leaders valued the ability of guitarists to play acoustically or electrically with the same instrument. In the end, very few professional musicians held on to the sound of a National tri-cone after they heard a viable electric guitar. Today, acoustic Hawaiian players consider early National square-neck tri-cones the best ever made, and acoustic-blues players pay a premium for the few pre-war round-neck tri-cones that have survived.