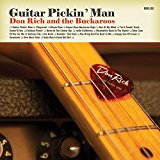 Don Rich’s recording career lasted only 13 years, beginning as the fiddle player on Buck Owens’ 1961 debut. But Owens released as many as four albums a year, and like Merle Haggard’s Strangers and Ernest Tubb’s Texas Troubadours, Owens’ Buckaroos cut several albums without their leader.

This 17-track compilation – with three cuts culled from Owens albums and seven by the Buckaroos, in addition to the previously unissued title track, lifted from a ’73 installment of “Hee Haw” – demonstrates why Rich commands such high esteem four decades after he was killed in a 1974 motorcycle accident, not quite 33.

As evidenced by the snaky Tele lines of “Chaparral” and the tasteful gut-string work on “Bossa Nova Buckaroo Style,” Rich ranks among the all-time country guitar greats. But unlike, say, session great James Burton, his output was almost completely confined to the Owens camp.

If Rich’s vocal style reminds you of Owens’, it should. He supplied the high harmony on nearly all of Buck’s hits. He and Owens were so close, musically and personally, Owens admitted that after Rich died, he was just going through the motions. In fact, Owens ceased recording in ’76 and didn’t come back until ’88, inspired by Dwight Yoakam.