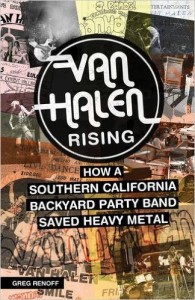 This is not just another salacious rock biography full of debauchery and drug-fueled excesses; this is the saga of European immigrants and their struggle to find the American dream. It’s also an underdog story about the courage and tenacity to believe in yourself, despite long-term rejection and overwhelming disappointment.

From their early days as a backyard party band, to striking fear into the hearts of headlining acts like Ted Nugent, Journey, and Black Sabbath, author Greg Renoff tells the Van Halen tale in a clear, fat-free style.

The book features more than 230 original interviews as well as quotes culled from other publications. While the band was not interviewed for the book other than former bassist Michael Anthony, heavy-hitters in the Van Halen universe include producer Ted Templeman and a cast of friends, early fans, and rival bands.

For Van Halen fans, owning a copy of Renoff’s book is a no-brainer. Non-fans should know that the book takes on greater significance. It’s packed with insightful information about the early years of one of America’s great rock bands.