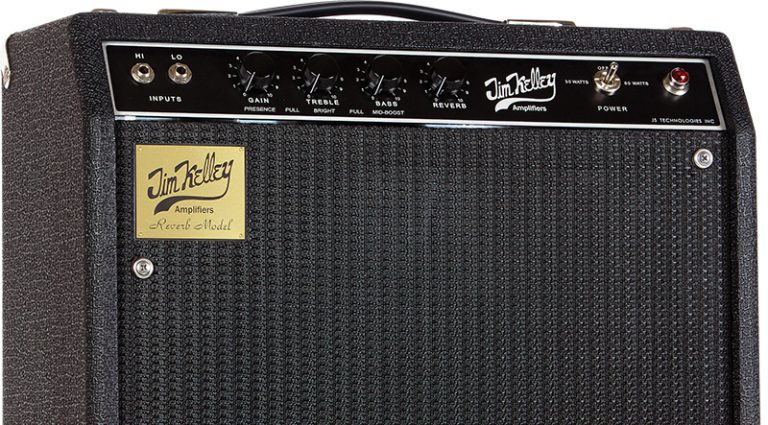 Jim Kelley began making his highly acclaimed guitar amplifiers 1978. His big revelation came while he was still doing mods and repairs. A customer brought in an Ampeg SB12 for service. Seems his girlfriend had overwatered a fern that was sitting on the amp and decided to turn it on to see if she had done any damage.

When the sparks stopped flying, the output stage, with its 7868 tubes and equally rare transformers, was deceased. Kelley went about rebuilding it with Fender transformers and more common 6V6 power tubes.

When he was done, Kelley couldn’t believe his ears. “It was glorious,” he recalls, but he didn’t know why. While a friend played through the resurrected SB12, Kelley studied the output with an oscilloscope. He discovered that the output section distorted while the preamp section remained clean. Furthermore, the Ampeg also used a Peter James Baxandall tone circuit that could both cut and boost the treble and bass frequencies.

Jim Kelley made 600 amps between 1978 and ’85. Fast forward to 2010, when Kelley ran into John Suhr at Winter NAMM. When Kelley began building amps, Suhr was working at Rudy’s Music in New York and had gotten Kelley’s amps into the hands of Mark Knopfler and Lou Reed, among others. At their first meeting in years, the pair discovered that each had been thinking about reissues of Kelley’s famous amps. Within a few months, Kelley provided Suhr with his archived blueprints and even a few original amps from which Suhr spec’d the transformers.

Just like the originals, the reissued single-channel Reverb Model has four 6V6 power tubes with three 12AX7 preamp tubes and a 12AT7 for the reverb circuit. On the front there are Hi and Lo inputs; controls for Gain, Treble, Bass, and Reverb; and a power switch to select 30 watts, 60 watts, or off. There is no control for volume; the Gain knob controls the power section’s output.

The amp also has two pull functions. Presence, located on the Gain control, adds high frequencies by altering the power section’s negative feedback. Bright, on the Treble control, provides an additional boost of the treble frequencies.

Build quality throughout is as good as it gets. The hardwood cabinets are dovetailed, the tolex is deeply grained, and the metal corner protectors, which have somehow become thinner and thinner on many amps over the years, are as beefy as they would have been in the early 1980s.

The Power Attenuator (sold separately and highly recommended) connector jack could easily be used as a quick-release for pulling a large boat behind an SUV.

When it’s plugged in, two words describe the Kelley Reverb Model. The first is “consistency.” Wherever the Gain control is set, the distortion and tone remain remarkably consistent throughout the volume range determined by the attenuator. There is an unavoidable loss in note bloom and room reverb as volume decreases, but the tone is basically what you set out with.

The other word is “versatile.” Because the preamp section remains clean and the 60-watt setting is Super Reverb-level loud, it’s easy to go from clean to fully distorted with the flick of a switch, no matter what the situation’s volume demands may be. Low-wattage amps, while sounding great in distortion mode, simply can’t do this.

Is power-section distortion superior to preamp distortion? In a word, yes. The harmonic richness, depth, and bloom is much more substantial and pleasing to the ear and there’s a natural smoothness to the distortion at any level.

The Jim Kelley Reverb Model offers a complete musical palette, one that is, to my ears, among the best available. The Power Attenuator ($599) is a necessity to thoroughly explore all of the amp’s audio treasures and possibilities.