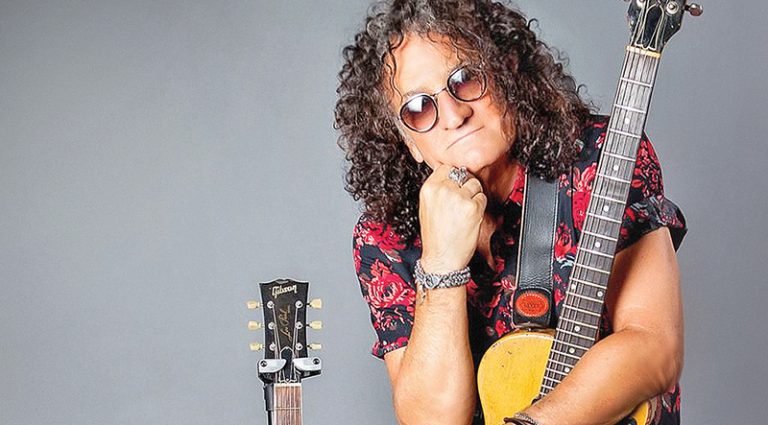 “I’m using my usual workhorses. My ’57 Les Paul TV, ’58 Les Paul Special, and my ’73 Dan Armstrong. I’m also using a black ’92 Les Paul I got from Izzy back in the day, and a single-pickup Gibson ES-335 for some of the slide stuff. The Dan Armstrong is my go-to for slide; I’ve had it since they first came out in the ’70s and I still have just the one Rock Treble pickup for it.”

Not much for swapping pickups or hotrodding guitars, Richards is a purist. “I’ve got a lot of guitars. I buy the guitars I buy because I want the sound they have. I just pulled one out that a guy named Ted Newman Jones (VG, December ’15) from Austin built for me years ago. He used to build for Keith and Ronnie, and Bob Dylan and Peter Buck also have one; they’re called Austin Specials. I hadn’t seen it in a while and I pulled it out, plugged it in and it sounds phenomenal so I am thinking of taking it back out, too. That’s one that came with his pickups, his specs; everything and I wouldn’t change it for the world.”

Between 1992 and 2010, Richards co-wrote and played lead guitar on a dozen records with Izzy Stradlin. “Izzy goes through guitars like you wouldn’t believe. He’s got such a great collection, Gibsons mostly. I played his acoustics from the Guns ‘N Roses days on that stuff. For the electric, all the Izzy stuff is my ’58 Special and actually, Mesa Boogie amps. We had just done some dates with Keith Richards on his Main Offender tour and I knew he played Boogies, so I was trying to kind of go for that tone, which I did not even get close to, of course (laughs)!”

Richards’ undeniable blue-collar sound comes primarily from the time-honored Gibson/Marshall combo. “With the Satellites, it’s JCM 800s and 900s, mostly. I’ve been playing in clubs since the ’70s, so I’ve gone through just about everything you can possibly play through, amp-wise, and I always go back to the old standards.”

Like all of us, Richards is no stranger to experimenting with amps. “Back in the day with the Satellites, all we used was vintage Hiwatt 50s and 100s. They sounded great live and in the studio – until we blew them all up (laughs)! Recently, I’ve also been playing a Vox AC30 Top Boost I’d started playing on tour with Izzy Stradlin. I had a Top Boost and a Kendrick amp on stage, and I really dug the sound, so I still use it a bit.”

When it comes to effects and gadgets, Richards is admittedly a “less is more” cat. “I plug straight in. I’ve never really been a pedal guy. I did recently get a Rickenbacker 12-string that I use a little compression on, but that’s it. I’ve found that I like the sound of the amp and I just crank it.”

The guitarist pulls his inspiration largely from Chuck Berry, Keith Richards, and Mick Taylor. “I listened to Exile on Main Street not long ago, and Mick Taylor, as brilliant as he is, has a couple little things in there that are just so human and add so much to the songs. That’s my desert-island record.”

In addition to the forthcoming Western Sizzlers record produced by Jeff Bakos, Richards recently took the Satellites into the studio to track a cover of Chuck Berry’s “Run Rudolph Run” for a Christmas compilation. Of the progression from tape to Pro Tools, he said, “We do it in the same fashion as the old days. It just doesn’t go to tape. We don’t mess with the vocals or anything, we just lay down the live band. To me, anything else is cheating, especially with a band like us, you know?” (laughs)

In the 1980s, the Satellites were the “country” band that was okay for the rockers to like. Withstanding a few lineup changes over the years, they’ve locked down a solid two-guitar unit that, like the original band, shares vocal duties and still draws crowds.

“We’re killing it right now. We have a great band, and people are coming out to see us. If they got electricity, beer, and money, we’ll play (laughs)!”