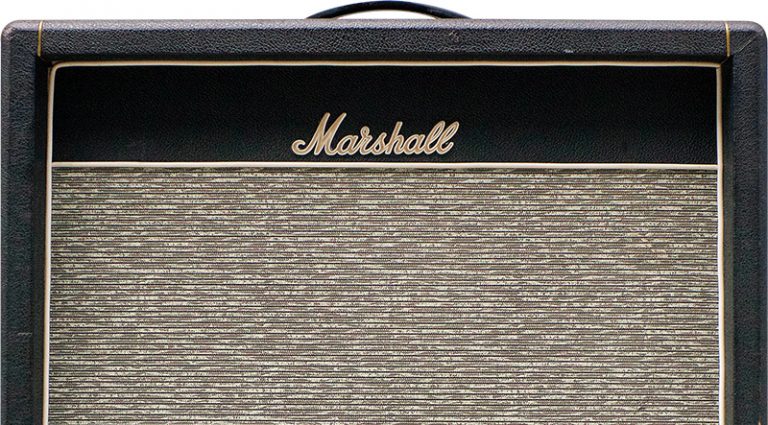 The often-told story of Marshall’s birth as a re-creation of the tweed Fender Bassman rarely includes mention of this rendition of the JTM45.

Whenever a discussion turns to how the circuit for the first JTM45 was lifted nearly point for point from that of Fender’s 5F6-A Bassman combo, it seems there’s always a caveat about how it ended up sounding slightly different as a head through a closed-back 4×12″ cab.

We still have the British components to consider, but this has got to be as close as Marshall’s rendition ever came to sounding like the Yankee combo that Jim knocked off to get the ball rolling. The funny thing is, too, that by the mid ’60s, Fender offered nothing that retained nearly this much of the DNA of its larger tweed models – yes, the blackface Super Reverb was a 4×10″ combo, but its circuit was voiced differently at almost every stage – so the JTM45 Super Tremolo in this rendition was the closest thing to “a tweed Bassman copy” that was available anywhere, even if no one ever looked at it as such. All of which is to say, it sounds somewhat like we think of a Marshall sounding, but not entirely… which takes us back to that caveat: put a tweed Bassman through a closed-back 4×12″ and it can sound pretty Marshally; put an early Marshall through an open-back 4×10″ and it can sound pretty tweedy.

After two years of building only separate head and speaker cab setups in the JTM45 format, Marshall introduced its first combos in ’64, taking the same chassis, with or without tremolo, into open-back 2×12″ and 4×10″ cabs. It’s ironic, perhaps, given Jim Marshall’s inspiration for the range, but the 4×10″ Model 1961 combo was never as popular as the 2×12″ Model 1962, and as a result is now a rarer find. Otherwise, it’s the same guts as the fabled Bluesbreaker, but with four Celestion 10s instead of two 12s. The combos also arrived on the cusp of a cosmetic transition at Marshall, as the early metal panels of 1962 to ’64 evolved to the gold Plexiglas panel (a change that occurred in early ’65, before the so-called “plexi” circuit changes of ’67). During the transition, though, amps were briefly made with cream Plexiglas panels. This beautiful early-/mid-’65 Super Tremolo, therefore, proudly displays its transitional origins with a gold front panel and a cream back panel – an unusual, short-lived combination.

The circuit of this JTM45 really did follow that of the 5F6-A Bassman of 1957 to ’60, virtually component-for-component. The “plexi” rendition of the 50-watt Model 1987 that followed (1967-’69), and the metal-panel amps after also continued to closely track that tweed circuit, but differed in few ways that made them different-sounding amps. As such, the ’67 to mid-’70s 50-watters tend to be more representative of “the classic Marshall sound,” with its crackling upper-midrange crunch and crispy high-end edginess at the point of breakup. The ’62-’66 JTM45, on the other hand – while still “Marshally” – presents a warm, juicy, tactile edge-of-breakup tone that has “big tweed” written all over it.

Why? Well, for several reasons. Elements common to both are the dual channels – one “Normal,” one “High Treble” – sharing a three-knob cathode-follower tone stack, a long-tailed-pair phase inverter, and a fixed-bias Class AB output stage. The JTM45 platform, this 4×10″ combo included, achieves that High Treble preamp stage with a bright cap of moderate value (0.0001uF a.k.a. 100pF) in the form of a high-pass filter around the channel’s Volume control, and another around the 270k-ohm resistor between the Volume control and the PI. Otherwise, both channels use .022uF coupling caps for a round, full, balanced frequency response. The plexi, on the other hand, uses a higher-value (and therefore brighter) .0022uF coupling cap on its bright channel, with a bright cap on the volume control of an extremely high value (relative to most bright caps, at least) of .005uF. Treble city. Beyond that, the GZ34 tube rectifier in the JTM45 and lack thereof in the plexi and the KT66s versus EL34s respectively also contribute to the aforementioned differences in playing feel and sonic signatures.

Entirely original where it matters (a few minor and necessary items of routine maintenance notwithstanding), this vintage amp is also in extremely clean condition, aside from a few typical tears at the edges of the black bronco vinyl covering and an L- shaped gash in the otherwise tidy pinstripe grillecloth. Inside, the circuit is virtually mint, with replacements evident for some of the larger filter capacitors, but all of the original “mustard” coupling caps remaining, and that’s the stuff that really counts.

Though the JTM45 is nominally rated at 45 watts, most techs who know these amps will tell you that they actually put out between 30 and 35 watts in this configuration with KT66 tubes. The relatively inefficient Celestion 10s of the era will reduce their punching power even further (a good thing in the estimation of most players today), and it’s a glorious 30/35 watts by any standards. Toothsome and pliantly clean at lower volumes, meaty and tactile at mid-level crunch, and singing and expressive up near full whack, this combo is an impressively versatile amp and a great British-American tone summit in a box, able to acquit itself beautifully at just about anything short of metal. Alternatively, just patch it into a good vintage closed-back Marshall 4×12″ cab with Greenbacks and you’re skidding back toward the right side of the pond. As for the tremolo that gives it its name, well, it’s there. Never a hotly admired rendition of the effect, it’s a useful addition regardless. From all angles, though, this is a lust-worthy amp indeed; breathe deep, and you can almost smell the potent musk of Marshall history.