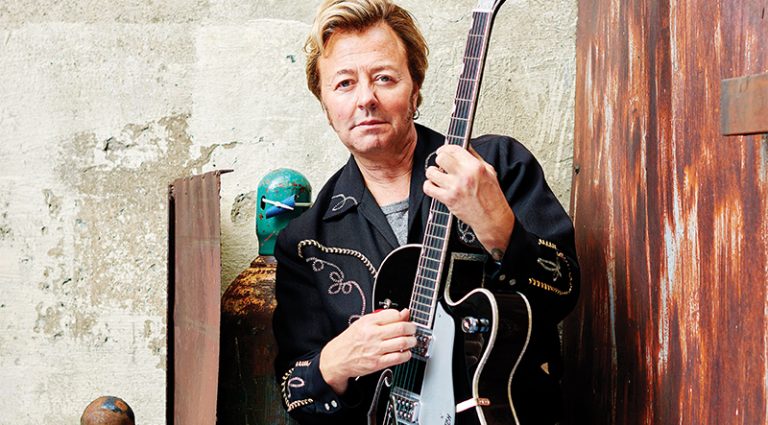 Brian Setzer’s guitar – usually a Gretsch 6120 – is the compass that leads him down various musical roads, live and in the studio.

Widely credited with launching a rockabilly revival while fronting the Stray Cats in the ’80s, he kickstarted the rebirth of big-band music in the ’90s with the Brian Setzer Orchestra. Rockin’ Rudolph is the Orchestra’s first Christmas studio album in 10 years and third holiday studio platter overall.

“You turn around and time flies past,” he said. “And, I was wondering if there were any Christmas songs left, but then thought, ‘There’s a ton of ’em!’ There’s so many I haven’t done, like ‘Rockin’ Around the Christmas Tree,’ so it turned into a whole bunch.”

Any musician who covers a classic song – especially a Christmas tune – debates whether to take liberties or stick to its original feel. Rockin’ Rudolph includes some Setzer interpretation.

“You have to make the songs your own, and deconstruct them. It’s a necessary thing, otherwise people could just buy the originals,” said Setzer, who first got into recording Christmas music when asked to do covers (including “Jingle Bells”) for the sound track to the 1996 Arnold Schwarzenegger comedy Jingle All the Way. “I thought, ‘Jingle Bells’? I’ve got to scuff it up. It’s like a sleigh ride through Brooklyn – hitting a lot of bumps and potholes!”

For the Grammy-winning Setzer, writing original Christmas songs is a daunting task.

“They’re about the hardest thing to write. I can’t sit and write a particular song in a particular style; it really just happens the way it does. I don’t know why that is,” he said.

And while it’s easy to feel cheerful during the holiday season, it can be challenging to transfer yuletide spirit into a sterile recording studio on a hot summer day. The solution?

“We deck it out to get a little vibe. It sounds silly, but it’s nice. It’s all little red twinkling lights, a little tree, some Santas and some garland. It puts us in the mood,” Setzer said.

Beyond the “atmosphere,” recording the band involves a mix of live tracks and overdubs.

“I’ve done it live all in one room, but that can be problematic because a Fender Bassman is frickin’ loud and bleeds into everything. I’ve done it in a different room, but then you’re not in the midst of the band,” he said. “This time, I overdubbed my parts. It seems the best way.”

Despite the logistics – charting, arranging, recording, etc. – Setzer revels in the results.

“The complexity of the big band – the sound of all the parts and the musicality of it – that blows me away. To me, that is real musical power – more than a loud guitar and amp.”

Speaking of, these days he sticks to a couple trademark ’50s Gretsches and signature 6120 Hot Rod/Nashville models along with some made by the company’s custom shop, including a White Falcon Relic.

“I never have been able to play a solidbody,” he said. “I can’t really get a tone out of them. Scotty Moore told me he has the same problem.”

Corey Harris goes back to his roots