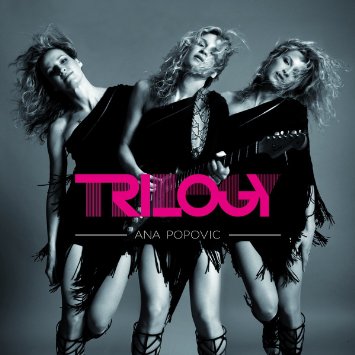 Belgrade’s Ana Popovic has been barnstorming the globe for years, entertaining audiences with her own brand of blues-rock, while gathering a loyal fan base. She knows where her bread is buttered, and it’s the fans that benefit.

Trilogy is an album that showcases her blues, jazz, funk, and R&B influences. An ambitious effort, this is a one-stop-shop to hear all things Popovic. She’s hired separate teams of producers and musicians to fulfill the stylistic tone of each set, and adjusts her performances accordingly.

While her guitar playing has always been consistent with a nimble-fingered attack, her singing has become more soulful with each album. Her Serbian twang is less evident, or perhaps it no longer matters. Trilogy shows Popovic reveling in her own uniqueness, rather than chasing untouchable female blues and soul archetypes.

Disc one was produced by Warren Riker and illustrates the depths of Popovic’s funk and R&B proficiency. She brings her A game on vocals and guitar surrounded by a top-notch rhythm section and a serious horn section. Bonamassa is featured on “Train” along with Popovic’s sultry vocals. A fret-burning Octavia solo ensues that will bring lots of Bonamassa fans to this party. A big highlight of this disc is “Hook Me Up” featuring sacred-steel player Robert Randolph. His solo is brilliantly soulful and sublime.

Disc two returns to the comfort zone of blues-rock with Tom Hambridge in the producer’s chair. Beginning with a nasty cover of “You’ve Got The Love” by Rufus, this section goes from steamy minor ballads, a cover of “Let’s Do It Again” by The Staple Singers, and the SRV-influenced “Who’s Your Mama.” There’s some great wah playing throughout.

Disc three is the jazzy stuff with Delfeayo Marsalis. Popovic lends her vocals to flawless jazz backing. She swaps her Strat for a Gibson ES-175 and performs honest renditions of “In A Sentimental Mood” and “I Don’t Know What Love Is.”

Trilogy is a great showcase that will provide just what the doctor ordered for fans, while raising the bar for Popovic artistically.

Caleb Quaye and the Faculty – Out of the Blue