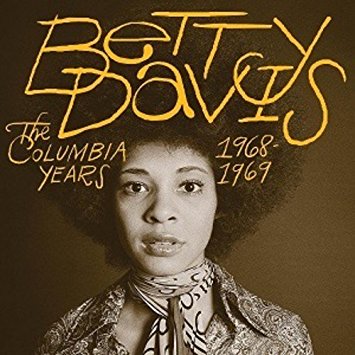 Betty Mabry was known far and wide by the sobriquet of the Nasty Girl. She earned the moniker for being too wild for her men to handle – and among her men were Miles Davis (whom she married in 1968), Jimi Hendrix, and Sly Stone, none of whom were exactly slouches when it came to wildness.

It was after her marriage to Miles ended that Davis released her eponymous debut LP in ’73. Her vocals were part Aretha, part Janis, all Betty Davis. And her band included in-your-face guitar by Neal Schon and Doug Rodrigues, powerhouse bass from Larry Graham and Santana’s Doug Rauch as well as piano by Merl Saunders, a horn section, and the Pointer Sisters on backing vocals. With rave-ups like “If I’m In Luck I Might Get Picked Up” and “Anti-Love Song,” the album was rock-solid R&B and funk. It would be followed by two more albums, plus a fourth that was not released until decades later.

Davis had started her musical career earlier, cutting a handful of brazen singles in the mid-’60s. With Miles’ help producing, she then recorded a number of demos in an attempt to get an album deal, but both Atlantic and Columbia (Aretha and Janis’ labels, respectively) passed. Those demos remained locked away and were believed lost. Until now.

The nine tracks on The Columbia Years show Davis honing her style. She’s not the brash nasty girl that she unveiled on her ’73 debut, but it’s all here in the making.

She does for CCR’s “Born On The Bayou” what Ike and Tina did for “Proud Mary,” and it deserves to be a classic. Her originals “Down Home Girl” and “It’s My Life” should have been hit singles if only Davis had had a bit more confidence to her strut at the time.

The musicianship is unbelievable, an A-team as one might only expect from Davis’ associations: John McLaughlin, Billy Cox, Mitch Mitchell, Herbie Hancock, Wayne Shorter, and others add their charms. Oh yes, and Miles did some of the arrangements, along with Shorter and Hugh Masekela. Only Jimi is missing – although rumors persist that he and Davis did indeed record together at some point.

Paying tribute to Davis, Mahalia Barnes and Joe Bonamassa do the job right. They don’t step too far out of the lines in covering 12 tunes, but Barnes’ vocals and Bonamassa’s guitar are up to the task – and they enjoy themselves thoroughly. Good stuff.