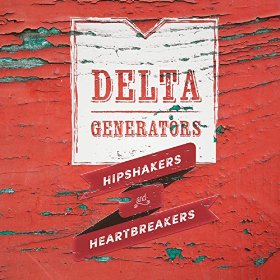 If you like honky-tonk, rock and roll, roots, and blues, this new outing from the Delta Generators is one-stop shopping. Hellacious slide guitar and ballsy harmonica bump and grind against earthy American rock grooves on the band’s fourth studio album. This highly decorated band hailing from the Boston area features Charlie O’Neal on guitar, Craig Rawding on vocals and harmonica, bassist Rick O’Neal, and drummer Jeff Armstrong.’

This is the kind of blues-rock album that makes for a complete live set packed with visceral stylistic variety. From the gritty swamp of “Way Down” with its vivacious slide guitar to the ’60s reverb-laden surf of “Bastard’s Lament,” the Delta Generators draw from a pool wide enough to keep things interesting without schizophrenia creeping in.

O’Neal plays top-shelf guitar throughout, providing a superb country solo on “Tom Waits For No One,” and strangles his guitar into rock and roll submission on “Two Headed Snake.”