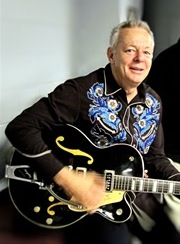 Guitarist Tommy Emmanuel will feature a 1956 Gretsch Chet Atkins 6120 prototype during two performances in Nashville this week. Emmanuel will stage the guitar tonight during a tribute to Atkins at the Grand Ole Opry, then again Saturday at The Country Music Hall of Fame. The events mark the guitar’s first public performances in more than 50 years.

“I am one of the luckiest guys in the world to be able to even hold this instrument, never mind play it onstage at the Opry,” said Emmanuel, an Atkins’ protégé and one of five musicians bestowed with Atkins’ personal Certified Guitar Player award. In 1997, the two recorded The Day Finger Pickers Took Over the World, which included the Grammy-nominated “Smokey Mountain Lullaby.”

Atkins played the guitar at the Opry in the mid ’50s to perform the Russian folk tune “Dark Eyes.” It was later owned by Bill Porter, the audio engineer who helped recorded the Everly Brothers, Elvis Presley, Roy Orbison, and Atkins from the late 1950s through the ’70s and for a time it hung in the Smithsonian as part of the collection belonging to the late Scott Chinery. Today, it belongs to guitar builder/repairman Tom Doyle.