Vintage Guitar is marking 25 years of publication with a year full of features. This month, using data compiled for The Official Vintage Guitar Price Guide 2011, we continue the celebration with a list of the 25 most valuable basses. 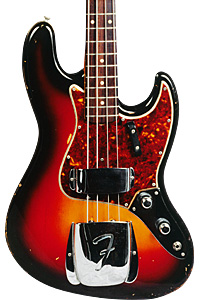 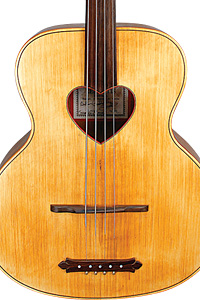 England’s Tony Zemaitis hand-made his electric guitars for many years, but built very few basses, mostly for U.K. rock stars like Ronnie Lane and Greg Lake. With only four extant, this model would be the ultimate four-string in the Velvet Goldmine. 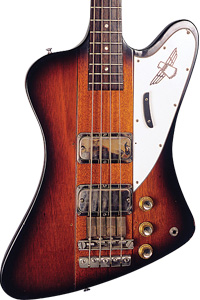 Arguably Gibson’s greatest bass, the two-pickup, “reverse-body” Thunderbird IV, with its neck-through design, combines style and function like few others. With a production run painfully short at less than two years, it could be ordered in any of 10 flashy colors and is the ultimate Gibson four-string (sunburst models from the same period go for $9,000 to $13,000). 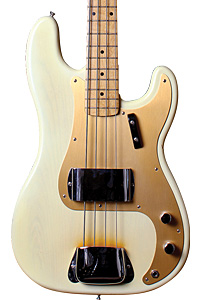 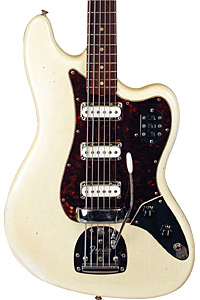 Leo Fender’s answer to a cheap-but-practical Danelectro was this super-elaborate three-pickup/30″-scale twang machine – with vibrato! The $329 Fender VI was “bass-ically” an overgrown guitar, and was a hit with studio players, though few others could afford one. Jack Bruce started his career on a sunburst model; now, collectors crave flashy custom-color examples while sunburst models fetch $5,500 to $7,000. 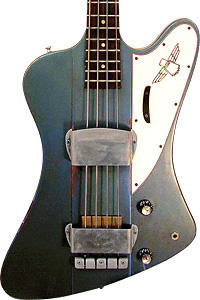 Gibson’s first long-scale competitor to the Fender Precision, the single-pickup Thunderbird II was built in larger numbers than the IV… but that’s not saying much. Anything other than brown sunburst (which go for $6,000 to $10,500) was a custom order, so few exist – even fewer without the common headstock fracture! 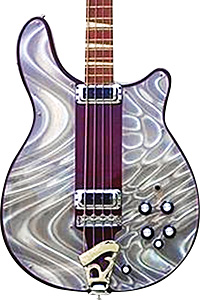 With only a handful built, this psychedelically-minded hollow Rickenbacker with internal colored lights pulsing to the music qualifies as the company’s ultimate four-string rarity. One went to a girl group in Las Vegas, one went to John Entwistle. Find one, and Rick collectors will find you! 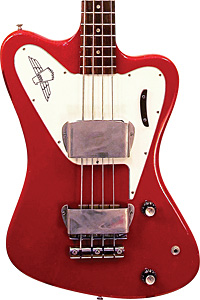 The second generation Thunderbird, launched in the summer of ’65, switched to a “non-reverse” body (with more-prominent upper horn) and abandoned the neck-through design. While not as favored by collectors, these T-birds are even less common than the first series – the two-pickup IV especially. Any finish other than sunburst (which sell for $4,000 to $5,000) is seriously rare.

In 1965, Rose-Morris inquired whether Rickenbacker might build a hollowbody bass. The company complied, but the awkward four-string 4005 never caught on. Just to drive collectors crazy, Rick also tried 6- and 8-string versions in barely more than prototype numbers. Rarely seen, even more rarely heard, but a major Rickenbacker collectible. The standard 4005 of that era goes for $5,000 to $6,500, while the 6-string version goes for $6,500 to $7,500. 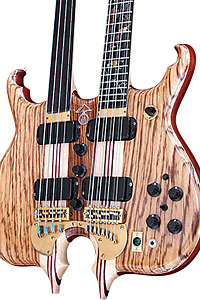 Nothing says ’70s badass like a doubleneck bass; being a hand-made Alembic is just icing on the cake! For sheer flash, nothing beats this imposing monster – and nothing could match its hi-fi sound possibilities, either.

The “non-reverse” single-pickup Thunderbird II was produced in larger numbers than the IV, but is still rare (and has never been properly reissued). Add a custom color (sunburst models sell for $2,500 to $3,200) and a never-broken headstock, and you have a Gibson bass that’ll set hearts racing. Ask Glenn Cornick! 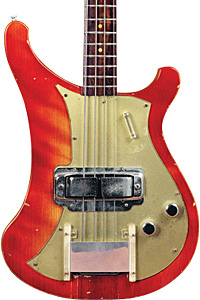 Rickenbacker’s first bass, and the earliest long-scale challenger to Fender’s Precision. With a neck-through design and a horseshoe pickup, the 4000 sounded great and the cresting-wave body was stylish and practical. It took Rickenbacker time to crack the bass market (making for low production), but the ubiquitous ’70s Rick 4001/4002/4003 models are this one’s children.

13. 1962-’64 Gibson EB-6
($7,500 to $8,000)
Gibson’s second attempt at a 6-string bass, it’s essentially an overgrown SG. With six big Kluson tuners and two P.A.F. pickups, this was one roaring monster of twang, but with only 66 shipped faded to obscurity very quickly. Also expensive like Fender’s VI, Gibson somehow omitted the whammy bar!

The ’60s hit CBS/Fender in a big way in ’68, with the hippier-than-thou Telecasters with floral and paisley wallpaper applied to the slab bodies under a heavy clearcoat. The basses (especially the blue) are rarer than the guitars and is one of the few CBS-era four-strings with heavy collector appeal. For comparison, a blond version from ’68 brings $3,500 to $4,000. 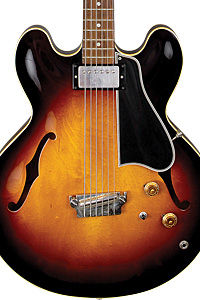 Gibson’s first Danelectro-inspired “baritone guitar” was basically a single-pickup ES-335 fitted with a bass bridge. Much more expensive than Nathan Daniel’s $135 Masonite box, rather less versatile sounding, it died a quick death and thus is yet another very rare Gibson.

A deluxe development of the Model 4000, the flashy two-pickup 4001 would eventually become Rick’s signature bass. In the early ’60s, it was a very expensive obscurity until U.K. players like Paul McCartney, Pete Quaife, Roger Waters, and eventually, Chris Squire, made the export-model 4001S (with dot neck and unbound body) a bass icon, leading to mass acceptance. 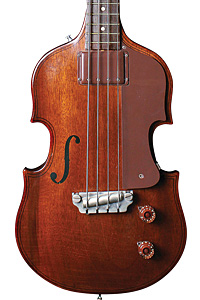 With Gibson’s first electric bass, Ted McCarty’s disdain for Fender manifested itself in a wildly different design. With a solid mahogany violin-shaped body, big, boomy pickup, and even a stand-up end pin, these were intended to create the big, warm upright thump, but louder. In ’58, the model was renamed EB-1, and collectors often refer to the entire run by that name.

With a short neck, only 15 frets, a long body, and a pickup in a harmonically awkward spot, the Bass V was not Fender’s masterpiece. Five-string basses eventually prospered, but not in this form. Still, the magic of Fender’s custom colors and limited production make for another Fullerton collectible; sunburst versions from ’65 go for $2,900 to $3,500. 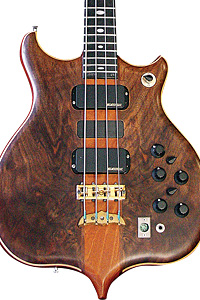 In the early ’70s, San Francisco’s Alembic reinvented the electric bass, using low-impedance pickups, onboard preamps, and multi-laminate construction, they were like nothing before. The Series II, with the “omega” body cutout, typifies the company’s high-end approach. 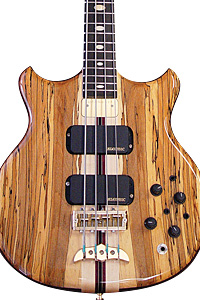 Many ’70s rock-star bassists embraced the Alembic, but it was jazz/fusion phenom Stanley Clarke who became most indelibly associated with them. Clarke’s personal basses included short-scale/vibrato-equipped models – even a “tenor bass” tuned up to guitar range! 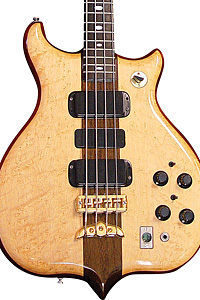 The original Alembic bass, with the “omega” pointed lower body designed to force the player to use a proper stand! Offered in three scale lengths and different wood combinations, this is still the classic ’70s Alembic of many player’s dreams. 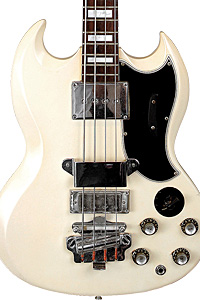 Jack Bruce, come home! In 1961, the solidbody EB-3 replaced the semihollow EB-2; with two pickups and a rotary Tone selector it was Gibson’s most deluxe four-string. Later models are fairly common, but early-’60s EB-3s were produced in smaller numbers and today are hard to find. 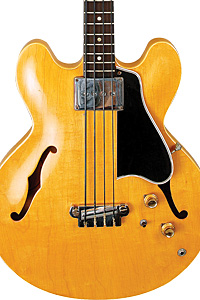 Gibson’s second bass, this mate to the ES-335 was initially judged a failure. Retired in ’61, an unexpected wave of popularity in the U.K. caused a revival by ’64 alongside its Epiphone cousin, the Rivoli. Still, the original banjo-tuner/black-pickup version is the collector’s choice – especially in the scarce blond finish. 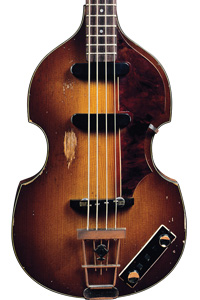 Remembered now for its connection to the Beatles, the early violin-body Höfner 500/1 is also significant as the first European electric bass, original in its own right. Light and airy in feel and sound (unlike Gibson’s slab-o-mahogany EB) the Höfner is the progenitor of generations of 30″-scale hollowbody four-strings from all over the world. Lefty versions fetch top dollar.