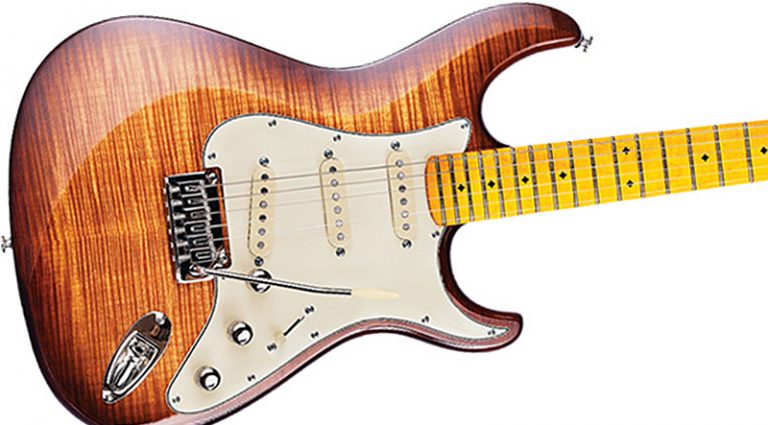 Every so often, a builder gives the art of guitar design a firm shove into the future. The Dean Zelinsky Tagliare Z-Glide Custom certainly fits into that category. On the surface, it’s a high-performance “super Strat” with basic features that should seem familiar, but this solidbody aims to pack the features of two or more guitars into one body. More importantly, it sports features that range from the clever and useful to outright radical.

Basic specs on the Talgiare include a 25.5″-scale maple neck with maple or rosewood fingerboard on an alder body (our tester had a flame-maple veneer top on the body and a tortoise pickguard) with cream-colored pickups, nickel hardware, and DZPL 20:1 locking tuners. Other offerings include a vintage-style tremolo bridge, flat-radius fingerboard with small diamond inlays, and a control array comprising one Volume and two Tone controls.

The moment a player picks up the Tagliare for the first time is likely to elicit a double-take. That’s because it has Zelinsky’s patented Z-Glide Reduced Friction Neck – a patterned carve that removes 70 percent of the surface wood from the back of the neck. Instead of a solid stretch of lacquered wood, the Z-Glide puts more air under the player’s hand, which theoretically results in increased fretting agility up and down the neck.

We tested how quickly we could move the fretting hand up and down the Z-Glide versus a standard neck, and it was clear this innovation is a bit faster. Whether that actually translates into faster playing is another question, but if you want a comfortable, low-friction neck, there does appear to be a compelling argument in favor of the Z-Glide.

Out of the case, the Tagliare looks like a basic solidbody (our tester had two humbuckers and a single-coil in the middle), but looks can be deceiving. In reality, these are five single-coil Zelinsky SideKick pickups – the bridge and neck units feature extra coils to kick each one into humbucker mode. There are pull pots under each Tone knob, but instead of merely “tapping” the coil, the SideKick technology produces a true single-coil pickup with – and this is important – no drop in volume. Instead of the usual volume attenuation experienced when tapping a humbucker, this tech provides full humbucker and full single-coil modes, and, thanks to the five-way selector, combinations of middle/bridge and middle/neck in both modes. That’s a lot of tones in one guitar (the Tagliare series offers numerous pickup and finish options.)

Plugged into a variety of amps, the Tagliare lived up to its promise. The Z-Glide neck, low action, and 12″ radius made for a slick playing experience, ready for shred, legato, tapping, blues bends, and whatever else you can muster. The up/down-accessible whammy bar held true, thanks in part to the locking tuners, and the frets were nicely dressed for easy playing. The guitar weighed a hair over eight pounds, by no means light, but it’s a solid build and the workmanship was excellent.

The Tagliare Z-Glide Custom tones, as might be expected, covered a lot of ground. The humbuckers delivered plenty of heavy-rock thrills in a modded Strat-style solidbody, with full tones and the willingness to scream when the gain was cranked. The in-between settings were also flavorful, giving plenty of quack. Deploying the SideKick’s bridge single-coil mode sent the Tagliare right to Fenderville, with excellent Texas flavors. The single-coil tone at the neck was more subtle (it’s the physical nature of an alder body with a bolt-on neck to already have some degree of Leo-inspired quack, even if loaded with a humbucker). For an increased Stevie Ray effect, we found many Austin-flavored treats by activating the neck single-coil and combining it with the middle pickup in Position 4.

In all, there’s a lot to like about the Tagliare Z-Glide Custom. Builder Dean Zelinsky has been making guitars for four decades and knows how to pack a lot of value into an instrument – and, no question, this model has tons to offer for a mid-priced axe. From its SideKick pickups to the Z-Glide neck technology, this Tagliare challenged many of our solidbody preconceptions.