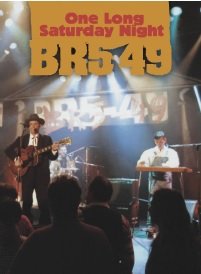 In the mid ’80s, bands like Jason and the Scorchers, Webb Wilder and (originally) the Beatnecks, and – well, not many others – chose Nashville to make their mark on roots rock. And while they didn’t become chart-toppers, they did shake things up. Meanwhile, hitting the scene were people like Randy Travis and Marty Stuart – serving up meat-and-three plates of hard-core country with sides of bluegrass, rockabilly, and western swing.

All of the above contributed to the possibility, albeit remote, of a quintet called BR5-49 rising up a decade later. It’s worth noting that early Asleep At The Wheel, the group that BR5-49 most resembled, honed their eclectic swing chops in West Virginia, then moved to Berkeley before settling in Austin. In the day, they couldn’t have gotten arrested in “Music City.”

It’s to Ohne Filter’s credit that the German TV show featured BR5 in ’96, when they’d released their debut full-length album only a month prior. But while new to CD racks, the band had clearly paid their dues, playing numerous gigs in Nashville’s Lower Broad, no matter how tiny the audience. This was one tight band.

The dual-threat of singer/songwriter/guitarists Bennett and Chuck Mead is bolstered by Don Herron on fiddle, mandolin, pedal-less steel, and Dobro, with a swinging rhythm section in drummer Shaw Wilson and doghouse bassist Smilin’ Jay McDowell. With their retro repertoire, fedoras, and ribbon ties (and, in Herron’s case, bib overalls), it would be easy to cross the line into caricature were it not for the fact that they simply do the music right. And in terms of chops, look no further than Herron taking a steel solo on “Heartaches By The Number,” with the fiddle tucked under his chin for the next chorus. And while Bennett supplies solid rhythm throughout, lead guitarist Mead adds Chetified pick-and-fingers solos to “Right Or Wrong.”

The show is available on DVD and CD, with a few differences. The CD adds four songs from a Japanese concert the same year and includes liner notes by Mead, while McDowell recounts the band’s beginnings in the DVD’s booklet.

After going through several personnel changes, BR5-49’s most recent CD was in 2006 – making these excellent documents all the more valuable.