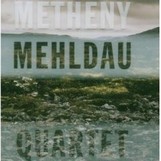 The meeting of minds here brings back memories of guitarist Jim Hall and pianist Bill Evans’ classic 1960s duo, Undercurrent. Now we have a new duet for a new current in jazz.

Metheny, of course, has proven himself over several decades of musical explorations that have come to almost define modern jazz guitar.

Mehldau, on the other hand, is a relative newcomer from a new generation. He confesses to having been inspired at just age 13 by Metheny’s “Are You Going With Me” from Travels, before his life was changed by As Falls Wichita, So Falls Wichita Falls. He has since become a Gen X jazz piano god, prolificly releasing wide-ranging albums.

Metheny Mehldau is new inspiration that jazz is far from dead. The 10 tracks are all original, each running into lengthy jams that dig into the nuances of the melodies. But as with the Hall-Evans collaboration, the magic is in the interplay. Metheny and Mehldau work back and forth on top of and behind each other. Rarely is one truly comping and the other soloing. Instead, their interplay winds within each other, demanding your attention – and then holding it hostage. Metheny unleashes a line, only to have the piano echo it, then rework it a bar later. Up and down and all around, it’s like a jazz rollercoaster ride.

The duo is joined on two tracks by Mehldau’s trio mates, bassist Larry Grenadier and drummer Jeff Ballard. But beyond that, it’s all a duet.

On “Make Peace,” Metheny plays a baritone acoustic guitar, making for a darker-toned mood. “Ring of Life” has him on guitar synth, creating the most pop-sounding, radio-friendly track here. “Summer Day” features Metheny on acoustic guitar, and the mix with the piano is at its purest.