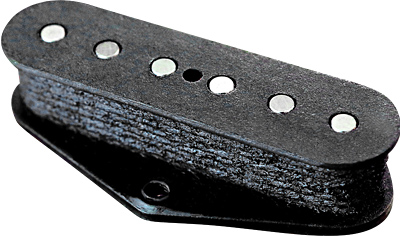 Jim Weider is one of the few guitarists who can truly wear the title “Telemaster” without being crushed by the heavy mantle. Besides his obvious prowess as a player, he is known for his beyond-reproach tone that recently has been abetted by his collaborations with AnalogMan. Mike Piera (a.k.a. AnalogMan) spent the last two decades building and modifying effects, and frankly helping to birth the boutique effects industry. His first collaboration with Weider was the much-celebrated and sought-after King of Tone overdrive pedal, while the more recent Big-T neck pickup was born out of Weider’s desire for a higher output and cleaner neck pickup that still sounded vintage. Their latest joint offering is the Big-T bridge pickup created to fulfill Weider’s request for a matching bridge-position unit that had the tone of his ’52 Tele with a tad more output.

The Big-T bridge pickup is made by pickup guru Lindy Fralin to Weider’s and Piera’s specs, all taken from Weider’s ’52, with the exception of slightly longer magnets to produce the output nudge Weider requested.

The Big-T bridge pickup was tested with an ash-bodied Telecaster into a 1965 Fender Deluxe Reverb with a Naylor speaker. With the amp’s volume on 3, the Tele and the Big-T produced unvarnished, full tone. The classic robust twang caused Roy Nichols licks to emanate from the Deluxe. With the Deluxe cranked up to the sweet spot of 6, the clouds parted. While some modern bridge pickups can lose focus, squeal, or, even worse, turn to mush at gig volume, the assertive Big-T came to life. No matter what stompboxes were thrown in front of it – including an array of fuzz, dirt, modulation, and echo units – the Big-T’s full and assured tone shined through the craziest of combinations.

The AnalogMan Big-T bridge pickup can be touted heartily to those searching for a vintage Tele-style tone that holds together at higher volumes and doesn’t lose its identity when injected into a sizeable pedalboard. This is a great-sounding pickup, offering a unique take on the classic blackguard sound. While others chase the harmonic swirl and smoke at the cost of sonic impact, the Big-T is a fine mix of assertive yet old-school tone. And, unlike many vintage originals, it mixes well with pedals and high-gain amps, making it a useful musical tool, not just something to talk about.