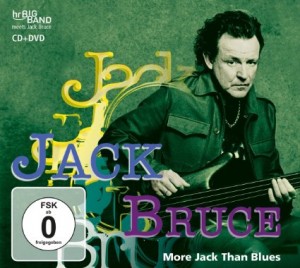 Jack Bruce was one of the most fascinating figures in rock and roll – although he preferred to be known as a jazz musician. As one-third of Cream (with Eric Clapton and Ginger Baker), the Scot changed the way the bass was viewed and played. But he was an extremely expressive and original singer, a prolific songwriter, and also played piano and harmonica, in addition to incorporating cello, his first instrument, into rock.

When Cream staged its acclaimed reunion at Royal Albert Hall in ’05, Bruce was still suffering from a difficult liver transplant he’d had a year and a half prior. But he rallied for the reunion and after, continuing to perform and record until his death in 2014 at 71.

In ’06, he accepted an invitation to play with the hr-Bigband at the 37th German Jazz Festival in Frankfurt. The collaboration was a smashing success, and the concert is available in a CD/DVD package.

Bruce looks to be in good health, not to mention voice, throughout the 80-minute program – a mix of songs from his solo albums, two blues standards associated with Cream (Willie Dixon’s “Spoonful” and Albert King’s “Born Under A Bad Sign”), and four Cream numbers.

Bruce plays piano on three numbers, including his “Theme From An Imaginary Western,” acoustic guitar on “Rope Ladder To The Moon,” and fretless electric bass for the rest of the set. The latter is uniquely suited for his vocal style. As he states in the liner notes, “I need the freedom to modulate a note when and where I want, not where a letter tells me to.”

He doesn’t solo a lot, but when he does, the old magic is there. And when he’s just playing a song or backing his vocal, while he’s not overly “notey,” his approach is best described as freedom.

Conductor Jorg Achim Keller’s arrangements show why the hr has been called innovative. Typically, big-band attempts at rock, including the great Gil Evans’ interpretations of Hendrix songs, are cumbersome. Not here. And it’s interesting that what would normally be a trombone section mostly plays tuba and euphoniums. Two additions to the ensemble are drummer Danny Gottlieb, best known as an original member of the Pat Metheny Group, and Jack’s son Corin on percussion. Lead guitarist Martin Scales successfully takes on the daunting task of essentially subbing for Clapton on closers “White Room” and “Sunshine Of Your Love.”

The former was co-written with Bruce’s frequent collaborator, Pete Brown; on the latter, Clapton joined the pair. The highlight of the show, though, is “We’re Going Wrong,” which Bruce wrote himself, for Disraeli Gears. His slow vocal, featuring long, drawn-out words, soars over the 6/8 rhythm, and when the 13 horns enter two minutes into the song, it’ll raise the hair on the back of your neck.

This article originally appeared in VG‘s May’16 issue. All copyrights are by the author and Vintage Guitar magazine. Unauthorized replication or use is strictly prohibited.