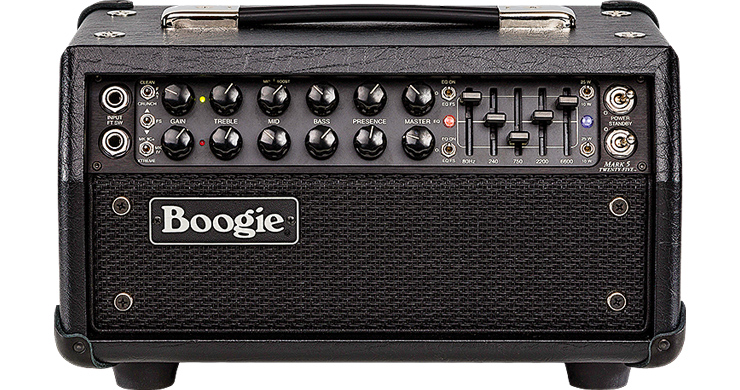 Housed in teensy cabinets, so-called “lunchbox” amps are all the rage, and to varying degrees do a nice job of living up to the phrase “Don’t let size fool you.”

Mesa/Boogie’s entry in the category is the Mark Five: 25, a full-featured/switchable-output head weighing less than 17 pounds with a footprint of just 14″ x 8.5″.

The amp has three low-gain modes in Channel 1 (Clean, Fat, and Crunch) and three high-gain modes in Channel 2 (Mark IIC+, Mark IV, and Xtreme). There’s also reverb (single knob on the back panel for each channel), an effects loop, and a speaker-compensated headphone-out from a cabinet-simulator section. The channels are footswitchable and the amp has a nifty built-in CabClone DI.

We started testing the Five: 25 by setting the the Bass, Treble, and Gain controls at 12 o’clock (there are no indicator numbers), Midrange to 9 o’clock (more on this later), and with ouput wattage at 25. The Clean mode was exactly that – well-balanced without being sterile. With humbuckers and single-coils, single-note picking was articulate and chords had a nice shimmer, especially with a hint of reverb. Fat mode introduced some extended low-end and a bit of mid-boost (think mid-’60s American amps) and was quite expressive with single-coils. When pushed, there was just a bit of drive without losing the fundamental note (a quality even more noticeable in the 10-watt setting). Notes had a halo of overdrive and more than a hint of compression. With the reverb on full, this setting easily reproduced classic surf tones. Crunch mode, though part of the low-gain channel, was decently overdriven. Adding a bit of mid-boost fattened the bottom end and focused the saturation for a smoother drive. From zero to half, the Mid control acted as a standard Mid knob (with a compressed range of 1-10). Passing the midway point, the boost kicked in, adding some drive to all of Channel 1’s modes, but working particularly well with Crunch for a near-perfect classic-rock tone.

The nominal settings of the tone controls were good starting points for each of the three modes in Channel 1. Minor adjustments of any controls brought about noticeable changes and a wide range of useable sounds. If these were the amp’s only three modes, it still could cover most any gig.

While Crunch mode lent a more-vintage overdrive, the Mark IIC+ mode in Channel 2 was modern-sounding despite having been used by the company for 30 years. Minor adjustment of the Mid and Low controls (each turned down to 9 o’clock) smoothed low-end; dialing in the familiar “smiley face” setting on the five-band EQ was sufficient to get this mode singing. Rhythm passages were tight and lead lines with either hums or single-coils were sustain-y without losing clarity. Switching to the Mark IV mode produced a noticeable bump in low-end response and overall sound was more rounded and louder. Lead lines were a bit smoother and just short of taking off when held for a moment. Engaging the Xtreme mode increased low-end even more and added still more volume. Muted chords were huge yet articulate; single notes swelled into controlled feedback almost instantaneously. When a pick was used the attack could be heard clearly.

To test the CabClone DI, we connected the XLR out to a digital desktop recorder. Starting with the Clean setting, the playback was very accurate – picked and strummed notes were clean while pushed notes broke up naturally without any digital-sounding noise. Switching the speaker emulator to “open-back” loosened up the sound and took off a bit of edge. Reverb sounded a little subdued compared to the amp’s speaker output but was still natural. Slight adjustment of the reverb compensated nicely. If you’re in a home studio and need to watch your volume, you can record with or without the speaker active, without any degradation of the recorded sound.

While it fits the lunchbox category, the Mark Five: 25 is definitely ready for stage and studio. And while not a budget amp, it truly can cover it all.