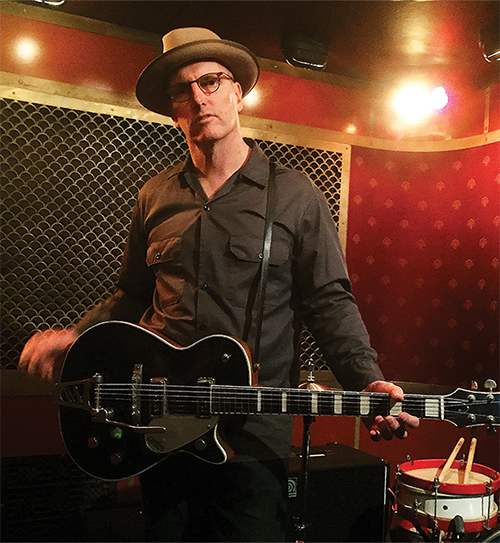 The instrumental music of Big Lazy echoes of Hollywood soundtracks – scores from gritty detective flicks, suspenseful prison breakouts, and spaghetti Westerns. Guitarist Stephen Ulrich amps this up with an array of retro parts interweaving post-war jazz, blues, country, and rock and roll. In his hands, it all becomes guitar playing you can see as well as hear. Big Lazy’s newest album is Don’t Cross Myrtle, and we caught up with the guitarist in his home base of New York City.

You must be a film-soundtrack devotee?
Crime-jazz and suspense music are definite parts of my style and, no question, film composers Elmer Bernstein, Bernard Herman, Henry Mancini, John Barry, and Quincy Jones were inspirations. A lot of Big Lazy’s music has been licensed for film and TV, which led me to start scoring films. Our first album, Amnesia, was used for the NBC series “Homicide: Life on the Streets.” I scored the first two seasons of HBO’s “Bored To Death,” and most recently scored Art and Craft, a film about an art forger; I wrote a lot of pieces inspired by [early jazz guitarist] Eddie Lang.

Films that come to mind that relate to your music are Orson Welles’ Touch of Evil and Sergio Leone’s westerns.
Touch of Evil is one of my all time favorites, thanks to Henry Mancini’s score and Barney Kessel’s raunchy guitar work. I’m a devotee of Ennio Morriconne’s scores for the Leone’s western films, and Nino Rota, who scored Fellini’s films like La Dolce Vita and The Godfather.

Who were your key guitar influences?
Early on, I studied with [noted jazz player] Sal Salvador, so I learned about Wes Montgomery and Charlie Christian. Sal stressed the lyrical side of a melody – telling a story with guitar. Later, I started investigating players like Scotty Moore, Cliff Gallup, and Paul Burlison. For blues, I liked Freddie King, Albert Collins, Billy Butler, and Johnny Guitar Watson, while instrumental favorites included Link Wray, the Shadows, and the Ventures. Also, country pickers like Hank Garland, Jimmy Bryant, and Merle Travis. Another slide influence was Don Helms, who played with Hank Williams and Patsy Cline in the ’40s and ’50s. All this led to the downtown New York City music scene, where players blurred between rock and jazz; I’m thinking here of avant-garde slide master David Tronzo, Bill Frisell, and Marc Ribot.

In Big Lazy songs, you often drop a major 7th note over minor-chord progressions.
That minor/major 7th thing is mysterious, suspenseful, and dissonant – the “film noir” chord, in a sense. I like to say I just keep rewriting “Harlem Nocturne” and “Caravan,” both of which use minor/major 7th harmonies.

Your tone is in that sought-after zone between clean and dirty.
I’m going for a kind of gritty beauty. I use old amps and very few effects. I generally reach for my 1960 Silvertone U2 guitar played through an overdriven ’40s Electromuse amp before I use a distortion pedal. So, I might be going for a very trashy sound, but it’s organic, pure, and dynamic – pure trash! And if the tune calls for clarity and crispness, I’ll play my ’55 Gretsch through my ’63 Gibson Falcon. Even when it’s clean, the Gretsch has a very distinct fatness and fuzzy warmth.

Where does your reverb and tremolo come from?
That’s the ’63 Falcon and a ’64 blackface Super Reverb, both of which have mind-altering tremolo and reverb circuits. You just can’t touch those old amps for tone. In the studio, I use the Falcon, Electromuse, Silvertone Model 1430, and a ’60s Ampeg Jet. Other amps include a new Fender Vibrolux.

What’s on your pedalboard?
I use a Klon Centaur for transparent distortion. It doesn’t really sound like a pedal – it just sounds like me after a few drinks. I learned about it a few years ago when Bill Finnegan, who created it, called to ask if our albums were on vinyl. He told me about it, and it’s the first and only overdrive pedal I’ve ever used. I also have an Ernie Ball volume pedal for swells, and a Boss delay. I did have a pink Boss analog delay, but I left it in a taxi. Damn.