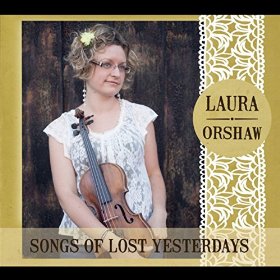 It’s refreshing to hear a young female playing fiddle and singing bluegrass and old-time music who is not yet another Alison Krauss wannabe. Not to take anything away from Krauss – her iconic position is well-deserved. But we already have one Alison Krauss; countless up-and-comers don’t seem to realize we don’t need another.

Thankfully, at 26, multi-instrumentalist Laura Orshaw is definitely her own woman, having recorded her first CD (one of two collections of instrumental duets with her father) 14 years ago. Growing up in northeastern Pennsylvania, she learned to play and sing from her grandmother, Betty Orshaw, a well-known regional musician. By 12, she was performing regularly with father Mark Orshaw’s group, the Lonesome Road Ramblers, covering material by bluegrass greats Bill Monroe, the Stanley Brothers, and Flatt and Scruggs. She studied traditional fiddle styles with Laurie Hart and the Horse Flies’ Judy Hyman and mainly taught herself bluegrass from records.

Now based in the Boston area, she leads Laura Orshaw and the New Velvet Band, which includes guitarist Tony Watt and Catherine Bowness on banjo – both also members of Tony Watt and Southeast Expressway. In this all-acoustic set, the three are joined by mandolinist Matt Witler and bassist Alex Muri, who was principal bassist in the Berklee Contemporary Symphony Orchestra.
asy to hear shades of Del McCoury, Ola Belle Reed, Larry Sparks, Rose Maddox, and Patty Loveless, although she wisely eschews mimicry.

Instrumentally, everyone shines – as on “Cotton Farmer,” where Watt’s booming six-string tosses flatpicked licks back and forth with Witler’s crystalline mando. Bowness’ dexterity on banjo and Orshaw’s mournful fiddle are highlighted on Blake’s “Uncle.”

Producer/engineer Michael Reese deserves high marks for achieving a pure, intimate group sound where no instrument’s or player’s personality is sacrificed, including his own guitar on two cuts. And bringing things full-circle, Laura’s dad provides vocal harmony on three numbers.

Done right, bluegrass can be one of the most vibrant, exciting musical genres – as Orshaw and her cohorts ably demonstrate.