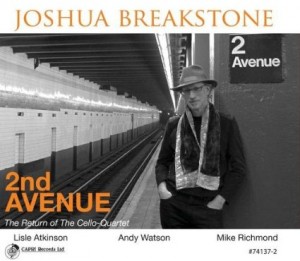 Joshua Breakstone’s latest is another chance for the guitarist to use his cello quartet. Yes, it’s Breakstone on guitar, bassist Lisle Atkinson, drummer Andy Watson, and Mike Richmond on cello for four of the cuts. No matter the make-up of the band, though, Breakstone remains the focus.

He’s been working for quite some time putting out albums that are always good and sometimes brilliant, but Breakstone hasn’t become the well-known guitarist you might think.

This is hard to believe when you hear his imaginative soloing on the hard-swinging “I’m An Old Cowhand” or his wonderful use of both single notes and chords during his soloing on the ballad “My Conception.” His playing on all nine cuts is succinct, imaginative, and full of soul covering tunes by the likes of Lee Konitz, Cannonball Adderly, Sonny Clark, and more.

In case you’re wondering how the cello works in a jazz setting, have no fear. It’s mostly subtle and adds to the songs it’s used on. And on Adderly’s “Home,” the harmonized parts done by the guitar and cello show just how the uniqueness of the instrument can add to a jazz feel without being intrusive.